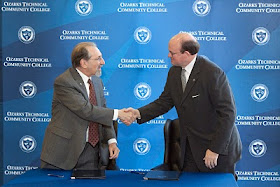 The University of Illinois Springfield has signed a new transfer agreement with Ozarks Technical Community College located in Springfield, Mo. The agreement is designed to provide a seamless transfer for qualified OTC students into online programs at UIS.

“Vice Chancellor Barnett and I were warmly welcomed by our colleagues at OTC, who share our commitment to high quality online education,” said Berman. “We’ve made a virtual bridge from Springfield, Mo., to Springfield, Ill., that will enable OTC graduates to complete their baccalaureate degrees, expand their career opportunities, and add to the economic strength of southwest Missouri.”

OTC Online is experiencing a similar jump in online enrollment with 2,327 students taking the majority of their classes online. The college has a total of 4,104 students who are taking at least one online class.

The University of Illinois Springfield has partnered with the Illinois National Guard to educate troops being deployed to Afghanistan. They discussed the country’s history, culture, public health needs, and economic structure among other topics during a recent series of classes.

“To be able to assist with those types of things is an incredible boost to the war effort and to the education of our soldiers,” said Col. Gary Schmitt of the Illinois National Guard.

The Guard approached UIS, the University of Illinois at Urbana-Champaign, the City of Springfield and Sangamon County about forming a partnership. The result was a three-day training session for about 40 soldiers called “Infrastructure 101”.

The first phase was hosted by UIS at the Public Affairs Center on Dec. 10, 2010. UIS faculty members Adriana Crocker, Kathy DeBarr, Michael Lane, Shahram Heshmat, Don O’Neal and Ali Nizamuddin shared their knowledge of the country with the troops.

“We have faculty with a broad range of interests and some of our faculty with experience, either growing up in the region or having traveled extensively in the region,” said Pinky Wassenberg, dean of the College of Public Affairs & Administration.

The idea behind the partnership is that it will continue once the troops are deployed to Afghanistan. The troops will be able to phone or email the professors as consultants to questions that may occur in the field.
Blake Wood at Friday, December 10, 2010 No comments:
Share

UIS professor's Beatles podcast the second most downloaded on iTunes U

The University of Illinois Springfield has reached a major milestone on iTunes U, a cross-platform multimedia distribution and learning environment that offers free educational content. The service is available to 200 million iTunes software users worldwide.

Professor Michael Cheney’s podcast “Unit 1: Beatles as Mosaic” was recently listed as the second most downloaded podcast on iTunes U. Cheney, a professor of Communication, teaches an online Liberal Studies course on The Beatles. “The Beatles: Popular Music and Society” series has also been listed for the first time in the “Noteworthy” section of iTunes U.

“I use podcasts in the class as a way to complement the material students are already studying and to provide them with poignant references and information to enhance their understanding of the course,” said Cheney.

Cheney’s “Unit 1” was downloaded 23,744 times during the week of Nov. 14. That doesn’t include numbers since it was highlighted in the “Noteworthy” section. All 39 Beatles podcasts combined have been downloaded over 395,000 times since they were launched. The Beatles podcasts are the most popular series offered by UIS on iTunes U. Cheney predicts downloads could triple after the most recent spotlight.

His three to four minute podcasts began during the 2005 fall semester. He also offers them in his Political Communication and Writing for Public Relations classes. The weekly podcasts include lectures and supporting material. Students use Apple’s iTunes software to listen to the recordings. The service is offered free of charge to both students and the university.

“I started using podcasts because I felt there were a lot of things students should know, but could not be identified and presented to them in a small compact unit like a webpage or a couple pages out of a book,” he said.

More than 800 universities have active iTunes U sites. Other institutions using the site include Stanford, Yale, MIT, Oxford and UC Berkeley, which all distribute their content publicly on the iTunes Store.

You can listen to Cheney’s podcasts by visiting the UIS iTunes U page at http://itunes.uis.edu/. For more information contact Cheney at 217/206-8271 or email mchen1@uis.edu.
Blake Wood at Thursday, December 02, 2010 No comments:
Share
‹
›
Home
View web version