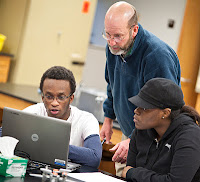 The University of Illinois Springfield is proud to announce the $28 million goal for the Brilliant Futures Campaign has been surpassed. To date, UIS has gifts, pledges and commitments totaling more than $28.4 million. The campaign, which began in July of 2003, supported students, faculty, programs, and campus facilities. The $28.4 million is nearly 90 percent more than what the University raised under the previous Campaign Illinois initiative that concluded in 2000.

“Every day I am inspired by the Springfield Community and its pride in UIS. I have met a number of people—alumni and community friends—whose vision led to the founding of Sangamon State University and who continue to invest in Springfield’s own public university,” said Susan J. Koch, University of Illinois Vice President and Springfield Chancellor. “I am also heartened by those who came later and have embraced UIS. Brick by brick, step by step, UIS is growing into an excellent institution. The Brilliant Futures Campaign has helped to transform UIS into a university of substance, known here in Illinois and on a national level.”

“The tremendous response of our friends and partners has made this achievement possible,” said Vicki Megginson, Associate Chancellor of UIS and Senior Vice President of the University of Illinois Foundation. “In the first quarter of 2012, we will be closing the books. We can already see evidence of the impact our generous donors have had on UIS.”

As a result of scholarships given during the campaign, 484 additional students have received scholarships, many with multi-year awards. Those numbers are expected to increase even further as UIS ramps up its new Access Illinois scholarship campaign.

“It was a great privilege to me as an alumna that UIS asked me to co-chair the Brilliant Futures Campaign,” said Kellner. “Our success is a direct result of many individuals--including all the alumni and community friends who have volunteered in many different ways their time and their resources.”

Other Highlights
The entire Brilliant Futures Campaign goal for the University of Illinois was $2.25 billion and to date the campaign stands at $2.366 billion. The 8 1/2 year campaign was one of the 20 largest ever undertaken in higher education in the country.

The University of Illinois Springfield Career Development Center has received a gold certification from the nonprofit organization OUT for Work for their dedication to serving lesbian, gay, bisexual, transgender, and queer (LGBTQ) students. This is the first time UIS has been honored with the award.

According to their website, “OUT for Work functions as a complimentary component in the total educational experience of LGBTQ college students; effectuating change in the development, evaluation, initiation, and implementation of career plans and opportunities.” The nationally recognized nonprofit organization is dedicated to educating, preparing, and empowering LGBTQ college students for the transition from academia to the workplace.

The gold certification will be awarded during the National Association of Colleges and Employers annual conference in Las Vegas this June. 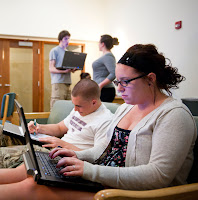 The magazine undertook the project in an effort to begin filling the information gap about the strengths and weaknesses of online programs.

“It is gratifying to see UIS recognized once again for outstanding faculty members and quality practices among the many accredited U.S. colleges and universities offering online degree programs,” said Ray Schroeder, UIS Associate Vice Chancellor for Online Learning. “This report is a reflection of the supportive online environment at UIS that both challenges and enables students to reach their full potential as they prepare to enter into successful and fulfilling careers.”

In evaluating the “Student Services & Technology” category ranking, U.S. News looked for programs which incorporated diverse online learning technologies and provided great flexibility for students to take classes by the methods of their choosing at the times of their choosing. Technology, such as having all courses centralized into a single system, such as Blackboard, was also a key factor in the ranking evaluation.

The “Teaching Practices & Student Engagement” ranking included factors, such as promoting student participation in class and allowing opportunities for students to readily interact with instructors and fellow classmates, as if they were in a traditional classroom environment. The category also includes implementing policies that ensure students are getting credit for doing their own work in the online environment.

The online Computer Science master’s program at UIS focuses on software and is geared towards students interested in the design, analysis, and implementation of software programs. Out of the 275 current Computer Science graduate students, a total of 146 or 53% are online students.

The Management Information Systems (MIS) program is specifically focused on providing a balance between technical skills and knowledge of business functions and processes. Out of the 190 MIS students currently enrolled at UIS, a total of 144 or 75% are online students.

The University of Illinois Springfield is taking a look back at the Year in Video 2011.

DVD copies of this presentation are available free of charge, upon request by contacting Blake Wood, UIS Campus Relations Multimedia Writer & Producer at 217/206-8404 or bwood8@uis.edu.

This video was produced by the UIS Office of Campus Relations.
Blake Wood at Tuesday, January 10, 2012 No comments:
Share 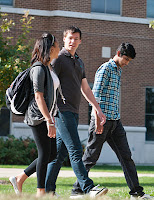 The University of Illinois Springfield has been named one of the top 100 best values in public colleges by Kiplinger’s Personal Finance for 2012. The ranking is based on high four-year graduation rates, low average student debt at graduation, abundant financial aid, low sticker price and great value.

Overall, Illinois Springfield ranked 85th on Kiplinger’s nationwide list of public colleges and universities. This is the first time UIS has appeared on the Kiplinger ranking.

Kiplinger’s assesses quality and affordability according to a number of measurable standards. This year, Kiplinger’s revamped the rankings to give more weight to academic value, such as the percentage of students who return for sophomore year and the four-year graduation rate. Cost criteria include low sticker prices, abundant financial aid and low average debt at graduation. While the criteria have shifted, the overall focus on value remains the same.

The freshmen retention rate at UIS remains high at 76.1%. Illinois residents, who are full-time students, pay $8,670 on average a year for undergraduate tuition. Nearly 70 percent of UIS students receive some form of financial aid.

“As states cut funding for higher education and tuition continues to climb, the word ‘value’ is more significant than ever,” said Jane Bennett Clark, senior editor at Kiplinger’s Personal Finance. “This year’s top 100 public schools deliver strong academics at reasonable prices. We applaud these institutions for tightening their belts without compromising quality.”

Illinois Springfield is the only public university in the state ranked by Kiplinger’s, other than the University of Illinois at Urbana-Champaign, who was ranked 27th overall on the list. The annual public school rankings appear in Kiplinger’s February 2012 issue—on newsstands today—and online at: www.kiplinger.com/links/college.

The University of Illinois has campuses in Urbana-Champaign, Chicago and Springfield with a total enrollment on-campus and online of approximately 79,000.