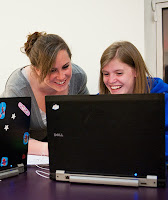 The University of Illinois Springfield is part of a nationwide study that will examine the academic potential of massive open online courses (MOOCs). MOOCs are free online courses offered to very large numbers of students, mostly not for college credit.

The research is being coordinated by the American Council on Education (ACE) with financial support provided by the Bill & Melinda Gates Foundation.

Among the questions ACE will address in research undertaken in collaboration with the University of Illinois Springfield's Center for Online Learning, Research, and Service (COLRS) are to what extent do MOOCs reach low-income young adult and older adult learners, what is the level of satisfaction of students enrolled in MOOCs, and do MOOCs have the potential to help lead to degrees or certificates. COLRS researchers will also explore types of MOOC teaching practices. This work will be performed using data from several MOOC platforms, including Coursera.

“MOOCs have the potential to make a huge difference in providing access to learning worldwide, so it is very important that we identify the best practices and approaches in effectively teaching students enrolled in this new way,” said research coordinator Ray Schroeder, UIS associate vice chancellor for online learning.

Dean Emeritus Bill Bloemer, an expert in learning analytics, and Distinguished Professor Karen Swan, a national expert on online teaching and learning effectiveness will head up the research initiative.

Also as part of the research, a pilot project with a small number of colleges and universities will be established to determine whether or not MOOCs are successful in re-engaging adult learners.

MOOCs are free online courses. Students worldwide can take part according to their own schedule and skip sections that are not of interest. Currently no academic or continuing education credit is awarded for MOOCs offered at UIS.

In the summer of 2011, UIS offered a MOOC on education that drew some 2,700 participants from 70 different countries, which studied the present and future of online learning. Another MOOC exploring the Emancipation Proclamation is being planned for early next year. The course will be offered starting on January 28, 2013. For more information, visit https://uis.coursesites.com/. Currently, no academic or continuing education credit is awarded for MOOCs offered at UIS.

U of I leaders tour UIS Emiquon Field Station and preserve

Leaders from the University of Illinois recently toured the UIS Therkildsen Field Station at Emiquon and the Emiquon Preserve learning about the research and collaboration taking place.

U of I Board of Trustees Chairman Christopher Kennedy, Trustee Edward McMillan, President Robert Easter, UIS Chancellor Susan Koch and other leaders took part in the tour.

“If I was a student, I’d be really excited about the opportunity to be a part of all of this. I think any school that you can mix biology, computer science, history and the great love for the state in one place is incredible,” said Kennedy.

The UIS Therkildsen Field Station at Emiquon opened its doors in 2008 after years of planning and development. It now plays hosts to researchers from around the world and hundreds of elementary, high school, and college students each year.

“I think for us as a university, it helps us continue to reinforce our mission,” said McMillan.

The 14,000 acre Emiquon complex was recently designated as a “Wetlands of International Importance” by the Ramsar Convention. It is one of only 34 Ramsar sites in the United States.

“I’m delighted to see this campus, UIS, involved here,” said Easter. “It indicates a maturity evolving with the campus where it takes on these projects. It’s more than just a small campus.”

Chancellor Koch credits great faculty members, such as Field Station Director and Biology Professor Mike Lemke, for coming up with the idea for an Emiquon research station.

“What we saw today was a wonderful example of what happens when wonderful professors really get engaged with the environment,” said Koch.

Lemke, who researches microbes at Emiquon, says it is unique for a right-sized university, such as UIS, to have a field station in the middle of an internationally significant wetland.

“This is a world-class wetland event and we happen to have a front row seat here,” said Lemke.

Learn more about Emiquon and the UIS Therkildsen Field Station at www.uis.edu/emiquon.
Blake Wood at Thursday, November 08, 2012 No comments:
Share

University of Illinois Springfield students, veterans, and community members gathered on November 4, 2012 to tie yellow ribbons on trees around campus. The ribbons will honor veterans throughout the month of November.

UIS student Samia Ahmad, a junior criminal justice and political science major, came up with the idea as a way to honor her boyfriend who’s deployed overseas. When she told others, the project quickly grew.

“I wanted to tie one yellow ribbon on the tree outside my apartment and it expanded to where I started talking to people about it and they were like why don’t you do every tree on campus,” said Ahmad.

Among those who helped tie the ribbons were veterans Chad Sibley and Adam Raboin, who are currently working to finish their degrees at UIS.

“We have to recognize our veterans,” said Sibley. “If it wasn’t for our military we wouldn’t have the rights that we have now.”

Both Sibley and Raboin took time out to write the names of fellow service members on ribbons.

“To me it’s more of a memorial thing,” said Raboin. “We lost guys in my tour. Some of these ribbons actually have the names of those guys that we lost.”

Ahmad hopes that the yellow ribbon campaign will become an annual tradition at UIS.

UIS students collect over 6,500 pounds of food on Halloween

Over 150 students from the University of Illinois Springfield went door-to-door on Halloween collecting over 6,500 pounds of food for the Central Illinois Foodbank.

The drive was all part of the annual Trick or Treat for Canned Goods competition where 14 teams battled to see who could collect the most pounds. The students canvassed assigned Springfield, Chatham, and Rochester neighborhoods collecting non-perishable food items.

“We’ve had a lot of good reception,” said Tina Buck, a senior communication major. “People are very grateful that we’re out here in the community. (We) could be doing something else on Halloween instead we’re giving back.”

William Newton, a freshman political science major from Chicago, realizes the importance of giving back to his new community.

“If you don’t help your own community nobody will help it,” said Newton. “This is a great opportunity to show that though you may be homeless or in need we are here and ready to help you.”

Before Halloween, the teams visited the same neighborhoods distributing door hangers that explained the project. Many residents left bags of food waiting for the teams at their front door on Halloween night.

“This is really great. It helps the Springfield community and the surrounding communities. And it helps everyday people that you see,” said Brittany Carls, a sophomore business management major.

The Central Illinois Foodbank distributes over 8 million pounds of food annually to over 150 food pantries, soup kitchens, residential programs and after-school programs in a 21 county region.

The canned food drive is part of the UIS Holiday Stars Project, a campus-wide service initiative giving focus to UIS’ efforts to make a difference in the local community during the holiday season.