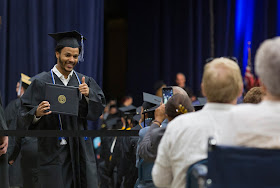 A total of 1,836 students earned degrees from the University of Illinois Springfield at the conclusion of the spring semester on May 13, 2017, pending completion of university requirements.

For photos, video and more from the 46th UIS Commencement Ceremony, visit www.uis.edu/commencement.
Blake Wood at Tuesday, May 30, 2017 No comments:
Share

The Illinois Innocence Project at the University of Illinois Springfield has been honored by the NAACP Decatur Branch with its prestigious Joe Slaw Civil Rights Award. The award was presented during the 77th Annual Freedom Fund Banquet and 4th Annual Game Changers Awards Ceremony at the Decatur Conference Center and Hotel on May 27, 2017.

In November 2016, the Project was instrumental in the exoneration of Charles Palmer, a Decatur resident, who was wrongly convicted of a 1998 murder and imprisoned for 18 years for a crime he did not commit.

“The award has existed for more than 30 years, yet this is the first time we are bestowing it upon a group based outside of the Decatur community,” said Jeanelle Norman, NAACP Decatur Branch president. “The NAACP believes the service of the Illinois Innocence Project was of such magnitude that the Decatur community moved one giant step forward in criminal justice.”

Since its founding in 2001, the Illinois Innocence Project has helped to free 10 wrongly convicted individuals.

“All of us at IIP and UIS are extremely grateful to receive this prestigious award from an organization as critically important to communities and our country as the NAACP in Decatur,” said John J. Hanlon, executive director of the Illinois Innocence Project. “We are proud of our work and of the result in Charles Palmer’s case, and equally proud to be the first recipient of this award from outside Decatur.”

“We find strength in organizations, such as the NAACP, whose work has a common purpose with ours – the fight for justice, often against difficult odds,” added Hanlon. “We thank the NAACP in Decatur for this award and pledge to continue that fight.”

The Illinois Innocence Project is dedicated to releasing innocent men and women imprisoned in Illinois for crimes they did not commit. They research and investigate claims of innocence and provide legal representation and other assistance to prove credible claims of actual innocence.

The Project reviews more than 300 requests for help from Illinois inmates each year. Undergraduate students at the University of Illinois Springfield and law students from the state’s three public law schools work with IIP attorneys to review, evaluate and, where strong evidence of actual innocence exists, investigate and legally pursue claims of innocence.
Blake Wood at Tuesday, May 30, 2017 No comments:
Share 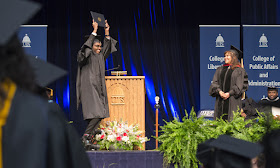 The University of Illinois Springfield held two commencement ceremonies on Saturday, May 13, 2017, at the Prairie Capital Convention Center in downtown Springfield. A record 1,270 students took part in the ceremonies, making it the largest commencement in the university’s history.

UIS Chancellor Susan J. Koch presided over the ceremonies, welcoming thousands of guests. She reminded graduates about the importance of earning a college degree.

“Graduates, this is your day and you are participating in an important rite of passage that universities have honored for centuries,” said Koch. “All that you have strived for culminates today with this milestone.”

Koch also congratulated first generation college graduates and thanked family and friends for supporting their students and encouraging them to succeed.

“Whatever your path has been to this day, you should be very proud of your accomplishment. I am proud of you,” said Koch.


During the second ceremony, Koch was joined on stage by University of Illinois President Timothy Killeen who spoke to the students about being engaged citizens who stand up for inclusion, diversity and the first amendment.

“Think every issue through and search for the truth,” said Killeen. “Evaluate, analyze and then speak up, speak out and lead with the integrity that your time here has instilled.”

Also during the second ceremony, Edgar J. Curtis, president and chief executive officer of Memorial Health System, was honored with an honorary doctor of humane letters. Curtis was nominated by the UIS Department of Allied Health for his outstanding and innovative leadership in health care administration as well as his sustained and exceptional community service.

“As a lifelong citizen of the community of Springfield, I have seen firsthand the growth and development of this incredible academic institution, the University of Illinois Springfield, and the significant contributions that your graduates of the past have made to our community, our region and beyond,” Curtis told the audience.

He added that the University of Illinois “has been the training ground for thousands of capable, committed, and compassionate individuals, many of whom went on to pursue their careers with Memorial Health System.”

“As the President and Chief Executive Officer of Memorial, I can tell you that we are a stronger, more educated, and community focused organization because of the high caliber of graduates that matriculated from the University of Illinois System and became a part of the Memorial team,” he said.

Curtis has led Memorial Health System and its seven affiliates since January of 2008, providing senior-level administrative leadership for the overall strategic direction of the health system. He serves on numerous community and healthcare boards and is currently chair of the Illinois Health and Hospital Association Board.

The student commencement address was delivered by Alexander William Camp who graduated with a master’s degree in public affairs reporting. Camp told the audience about the wonderful faculty members he’s had at UIS, the friends he has made on campus and about the obstacles he has overcome to earn his degree.

“If anything this four-year (or longer) odyssey should teach us, we are battle tested not to survive, but to master the moments that lie ahead, for we are the living embodiment of what this school prides itself on, Leadership lived,” said Camp.

Camp congratulated his fellow graduates for earning their degrees, reflecting on all of the all-nighters before exam day and other hard work that went into earning a degree.

“It’s that kind of commitment that has not been in vain as it has led us to this moment in time, bringing us all together and for that, you will always have my undoubted admiration. We did it,” he said.

Photos and more video are available at the commencement website: www.uis.edu/commencement/.
Blake Wood at Sunday, May 14, 2017 No comments:
Share
‹
›
Home
View web version