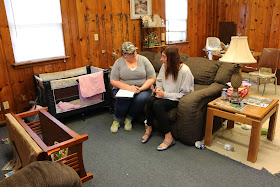 The University of Illinois Springfield’s Child Protection Training Academy used its mock simulation house to help train first responders from around the country in methods to investigate and document child abuse during a training held September 19-21, 2017, on campus.

The class was part of a national course by the Gundersen National Child Protection Training Center, located at Winona State University in Minnesota.

UIS created the Child Protection Training Academy in 2015, in partnership with the Illinois Department of Children and Family Services (DCFS). The Child Protection Training Academy has already trained more than 250 DCFS investigators. The mock house and a separate mock courtroom are also used to train UIS students who are part of the Child Advocacy Studies (CAST) certification program. 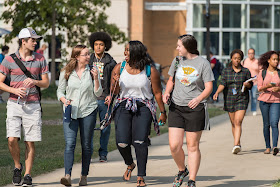 
University of Illinois Springfield students volunteered at nine Springfield locations during the annual Welcome Week Service-A-Thon on Friday, September 1, 2017. The event encourages students to place community first by starting the school year off in service to others.

“It’s just a great way for students to connect with their community around Springfield and meet other students on campus,” said RJ Swartz, the AmeriCorps VISTA for the UIS Volunteer and Civic Engagement Center.

UIS sophomore psychology major Alexus Venegas-Rodriguez of Hoffman Estates says she volunteered before coming to UIS. Now, she wants to give back to new home.

“I just really love giving back and helping people out, so they don’t have to work as hard. It just feels good to be helping and making a difference,” said Venegas-Rodriguez.

Other students, such as freshman political science major Jennifer Viramontes of Carpentersville, also have a history of volunteer work. She helped to clean up the shores of Lake Springfield at the Girl Scouts of Central Illinois’ Camp Widjiwagan.

“We started wiping down mattresses with Clorox wipes and then we’re just clearing off the shore, getting all of the big sticks out of there, any rocks we’re throwing up higher on the shore,” she said.

Freshman Annabella Paradies of Genoa volunteered sorting medical supplies at Hospital Sisters Mission Outreach. The unused supplies will be boxed up and shipped to hospitals around the world.

“It makes me feel good about myself and I like knowing that I can help others around the world,” she said. “I feel like as a freshman it’s important to get yourself out there and help others.”

Swartz hopes students who took part in the Service-A-Thon will continue to volunteer in the community throughout the school year.

“Service is going to be a big part of your time here at UIS, so it’s a good way to start off the year for sure,” he said.
Blake Wood at Friday, September 01, 2017 No comments:
Share
‹
›
Home
View web version