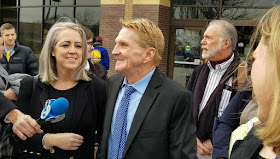 A DuPage County judge found William (Bill) Amor not guilty of arson murder today. Amor, a client of the Illinois Innocence Project at the University of Illinois Springfield, served 22 years in prison for a crime he did not commit.

The victory comes after two weeks of testimony between January 24 and February 2, 2018, at which attorneys presented new arson-related scientific evidence in the 1995 Naperville arson case. Similar testimony resulted in Judge Liam Brennan vacating the initial conviction in April 2017. Amor was released from custody in May of 2017 and has been free on bond.

The Amor case is believed to be the first of its kind in the state of Illinois, where a court issued an official finding that modern fire science is “new science” under the legal definition of “newly-discovered evidence” entitling an innocent person to a new trial.

Upon his acquittal, Amor said, "This is the end of a nightmare for me. I have fought to clear my name for the last 22 years and I am so grateful that I was able to have my day in court for the truth to be heard. I am looking forward to starting the next phase of my life as a free man, no longer labeled as a murderer, for the first time in a long time."

Amor would be convicted two years later, on September 17, 1997, of murder and aggravated arson for setting the fire that caused Miceli’s death. Amor was convicted based upon faulty fire investigation and a purported confession to starting the fire in a way that experts recently testified is scientifically impossible. With the exception of the false confession, Amor has maintained his innocence from day one. He was ultimately sentenced to 45 years in prison.

The alleged false confession was given to police after two weeks in jail, following 15 hours of questioning and immediately after Amor had been served divorce papers in the interrogation room at the police station. The confession included details as to how Amor purportedly started the fire with vodka and a lit cigarette – which all experts, including the State’s own witness, testified is not possible.

“Justice has finally come for Mr. Amor in DuPage County. This took an army and we formed quite a team with the Exoneration Project and Cozen O’Connor, coming together to exonerate Bill,” said attorney Lauren Kaeseberg, who represents Bill Amor. “We have known for a long time that Bill is innocent and a terrible injustice occurred. While it took far too long, we are thrilled by today’s verdict finally exonerating Bill. We look forward to seeing Bill live his life, finally truly free, after so long.”

At the trial, nationally recognized arson experts testified about advances in fire science that discredit the original conviction in this case. The new evidence includes scientific proof that the way Amor claimed the fire started in the confession is impossible, and modern fire science actually shows that Amor was not even in the apartment when this fire started.

“Science matters. The truth matters. We are elated to have corrected this injustice and to be able to bring Bill justice after two long decades,” said Tara Thompson, staff attorney at the Exoneration Project. “This case presented a unique chance to objectively prove that the confession in this case is false – science proves that this so-called confession was fundamentally untrue and coerced.”

“I am happy and relieved for Bill- this has been a long journey over many years," said attorney Erica Nichols Cook. “Bill and his family have suffered due to his wrongful conviction and retrial. He is looking forward to the future.”

The Illinois Innocence Project looks forward to celebrating Amor’s exoneration at the Project’s annual Defenders of the Innocent award dinner in Springfield on April 28, 2018, at the Crowne Plaza Springfield.
Blake Wood at Wednesday, February 21, 2018 No comments:
Share 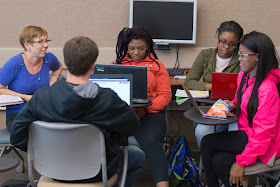 The University of Illinois Springfield has released the Dean’s List for Fall Semester 2017.