The University of Illinois Springfield is honoring international students through a new display of 63 foreign flags in the Sangamon Auditorium lobby. A dedication for the display was held on Friday, November 19, 2010.

The flags represent the countries from which students have traveled to attend UIS over the past 40 years. The university currently has a population of 195 international students from 43 different countries.

“The reason we put these flags up is to recognize the role these students play in making UIS both a diverse and an excellent educational institution,” said Tim Barnett, vice chancellor of Student Affairs at UIS.

International student Abhineet Singh decided to come to Springfield from India because of the friendly environment. For him seeing his countries flag on display shows the university cares.

“This is very important to me being an international student getting recognized and appreciated by the university is a really good thing,” said Singh.

Other students like Driss El Akrich, who is from Morocco, agree the flags are a great addition to the UIS campus.

“I really appreciate it. It does make you more proud to be part of UIS and to enjoy diversity, not only to embrace it, but to see it on display,” said El Akrich.

UIS Chancellor Harry Berman thanked the staff members who made the flag display possible calling it “beautiful”. He also made a prediction about UIS’ future when it comes to international outreach.

“If I were to identify one way in which UIS five years from now will be different than the UIS of now it is in the degree to which we have international students here and we have our students traveling internationally,” said Berman.
Blake Wood at Friday, November 19, 2010 No comments:
Share

The University of Illinois Springfield’s Downstate Illinois Innocence Project with the support of the UIS Center for State Policy and Leadership has been awarded a $687,448 grant to clear downstate Illinois innocence cases where DNA testing might decide the outcome. U.S. Senator Dick Durbin helped to facilitate the grant, which is one of the largest in UIS’ history.

The United States Department of Justice Bloodsworth Grant, named in honor of Kirk Bloodsworth, the first DNA death penalty exoneration case in the U.S. in 1993, will provide funding for DNA laboratories to conduct testing, investigators to locate evidence and attorneys to represent inmates in filing post-conviction DNA testing motions.

“In Illinois, we’ve seen firsthand how innocent people can get their lives back by taking advantage of post-conviction DNA testing to solve old cases and exonerate the wrongly convicted,” Durbin said. “The Downstate Illinois Innocence Project has worked to ensure fairness and accuracy in the justice system, including directly participating in three exonerations.”

The project will initially focus on 30 cases out of over 400 requests it has received. Those 30 cases will be further reviewed to determine if the evidence can be tested or retested for DNA and if the likelihood is that the individual is actually innocent of the crime for which they were convicted.

"As of today 261 individuals nationwide have been exonerated using DNA testing. Thirty of those are already from Illinois," said Larry Golden of the UIS Downstate Illinois Innocence Project. "The backlog on requests for testing is huge. We know that DNA is the most important forensic tool to identify or exclude a perpetrator of a crime. This grant will give the project the resources to follow up with investigation and DNA testing of the many requests we have from people who may actually be innocent."

As part of the grant, the project is collaborating with the University of Illinois at Urbana-Champaign College of Law and the Southern Illinois University Law School to have students assist in the review of the cases and the filing of motions to have the evidence tested. The Innocence Project is housed in the UIS Center for State Policy and Leadership, which assists in bringing grant money to campus.

“This grant epitomizes the good that can be done by linking academic and student opportunities with real world problem solving,” said David Racine, interim executive director of the center. “The grant will allow even more UIS students to participate in and learn from the project’s important work. We plan to build on the grant to obtain even greater support for the students and faculty of the campus.”

Bloodsworth is scheduled to visit the UIS campus and speak on the topic of wrongful convictions on Tuesday, November 30, 2010 from 6:30 to 8 p.m. in Brookens Auditorium, located on the lower level of Brookens Library. The event is free and open to the public.

For more information contact Larry Golden at 217/553-7171 or email lgold1@uis.edu. More information about the Innocence Project can be found on their website at www.uis.edu/innocenceproject/.
Blake Wood at Monday, November 15, 2010 No comments:
Share

UIS students collect a record 8,354 pounds of food for the Central Illinois Foodbank 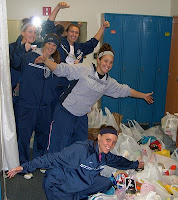 Student volunteers at the University of Illinois Springfield collected 8,354 pounds of food during the annual Trick-or-Treat for Canned Goods competition on Halloween night. That’s nearly double the 4,450 pounds of food collected last year for the Central Illinois Foodbank during the October 31 event.

Seventeen teams of UIS students canvassed assigned Springfield neighborhoods collecting non-perishable food items. The teams visited the neighborhoods before Halloween, distributing door hangers that explained the project. The canned food drive is part of the UIS Holiday Stars Project, a campus-wide service initiative giving focus to UIS’ efforts to make a difference in the local community during the holiday season. The effort now shifts to the UIS campus, with a goal of collecting additional canned foods to reach an overall goal of 10,000 pounds by December 2, 2010.