UIS students give back to Springfield through Service-A-Thon

Dozens of students from the University of Illinois Springfield ended their first week of the fall semester by giving back to the Springfield community.

“The idea is to get students involved in service right away, so it’s something they’re thinking about as they move forward in the semester and throughout the year,” said Mark Dochterman, director of the UIS Volunteer & Civic Engagement Center.

Students spent time helping Habitat for Humanity prepare a future home site located on North 5th Street in Springfield. The students moved a sign allowing construction trucks to access the property and cleaned up the site.

“It feels good, even though it’s something small,” said Jena Marlatt, a UIS freshman. “It’s something we can do so the work can get started and we do have the opportunity to come back later and help build the house.”

Each of this year’s projects falls under one of the UIS Volunteer &Civic Engagement Center’s areas of priority (Habitat – hunger and homelessness, AVID – youth and education, and Mission Outreach – public health).
Blake Wood at Friday, August 31, 2012 No comments:
Share

“It’s just a great opportunity for everybody on campus employees, faculty, staff, and of course, most importantly students to get together and get to know each other all over again and look forward to the year,” said Koch.

The picnic gives the campus community a chance to celebrate the start of a new academic year, while enjoying free food, friendship, and great entertainment.

Senior Communication major Yvonne Barbosa had never been to the annual event, but now realizes she’s been missing out. She was one of many students who got to spend time speaking with Chancellor Koch.

“I like it because she’s actually walking around somewhere and personalizing and getting herself familiar with the students,” said Barbosa.

Chancellor Koch was joined by University of Illinois President Robert Easter at the event. He greeted the crowd, telling them how such an event would not be possible at a larger university.

“As I talk with students, faculty, and staff, I sense a real passion for this institution for wanting to make it absolutely the best that it can be,” said Easter. “It’s already recognized as the best public regional university in the state of Illinois. The next stop is the best throughout the Midwest and that’s doable.” 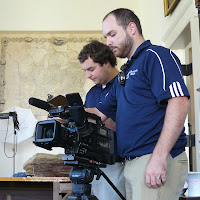 The University of Illinois Springfield is pleased to announce that it has received a Media Production maximum grant award of $5,000 from the Illinois Humanities Council (IHC) to support the production of The Old State Capitol: A Witness to History, a documentary on the Old State Capitol Building.

“The Old State Capitol has significant connections to our country’s history.” said Jerry Burkhart, director of UIS’ Office of Electronic Media (OEM), which will produce the HD video. “From Abraham Lincoln to the present, A Witness to History will engage visitors at the Old State Capitol and create enthusiasm among those who watch the documentary at a school or local library.”

In collaboration with Old State Capitol Site Manager Justin Blandford, local historian Tara McAndrew will write the script, with a final 55-minute video expected in 2013. In addition to being shown at the Old State Capitol, the video will be appropriate for public television. It could also be used by history and luncheon clubs, at library presentations, and on the internet. Plans are to distribute the documentary to schools throughout Illinois. Essential support for the project is also provided by the Shelby Cullom Davis Charitable Fund.

“The Illinois Humanities Council is proud to support not-for-profit organizations that promote the importance of the humanities in private and public life. Through their efforts, Illinoisans have greater access to lifelong learning opportunities,” said IHC Executive Director Kristina A. Valaitis. “These champions of the humanities make their communities and our whole state more vibrant.”

The IHC’s Community Grants program is its oldest. Since 1974, the IHC has welcomed grant proposals from not-for-profit groups that have a story to tell about the state, or who have a way to use the humanities to enrich community life. Not-for-profit organizations may apply for Mini Grants up to $2,000 and Major Grants up to $10,000.

For more information about the Illinois Humanities Council, please contact the IHC offices at 312/422-5580 or visit their website at www.prairie.org.

University of Illinois Springfield is the liberal arts campus of the world-class University of Illinois. About 5,000 students enroll each year seeking a U of I degree but also the intimate learning environment of a private college. Located in the state capital, UIS has a special mission in public affairs and has produced thousands of leaders in government and non-profit organizations in Illinois.

The Illinois Humanities Council is an independent, nonprofit state affiliate of the National Endowment for the Humanities, dedicated to fostering a culture in which the humanities are a vital part of the lives of individuals and communities. The IHC creates programs and funds organizations that promote greater understanding of, appreciation for, and involvement in the humanities by all Illinoisans, regardless of their economic resources, cultural background, or geographic location. The IHC is supported by state, federal, and private funds.
Blake Wood at Monday, August 20, 2012 No comments:
Share

The University of Illinois Springfield’s Therkildsen Field Station at Emiquon has been awarded a $23,280 grant from the National Science Foundation (NSF). The grant will help develop a practical plan for future research at the station over the next decade by fostering a dialogue among scientists, resource managers, and educators.

“This recognition by the NSF shows the importance of the research, outreach, and education being led by UIS faculty at the Therkildsen Field Station at Emiquon,” said UIS Chancellor Susan Koch. “The restoration effort being done at Emiquon holds the potential for great scientific significance.”

The grant will allow UIS to directly support the research of scientists and students who are in residence at the field station, located near Lewistown, Ill. on the Illinois River. Staff will explore better ways to enhance the impact of Emiquon research by attracting more researchers, coordinating data management, and streamlining access to scientific results.

“Gaining NSF support is an important accomplishment for the station and will define our efforts for the next decade,” said Michael Lemke, director of the UIS Therkildsen Field Station at Emiquon and professor of Biology. “Planning will help us increase the impact of existing relationships and forge new educational alliances.”

The UIS Therkildsen Field Station at Emiquon was established in 2008 to help monitor, guide, document, and interpret the Emiquon restoration, a floodplain restoration effort that is among the largest in the nation. Researchers have a particular interest in the study of microbial communities and have facilitated an ongoing, long-term study of them at Emiquon.

“Work at Emiquon is providing insights into water quality issues of the Illinois River system in particular, and to river ecology in general,” said Lemke. “The field station is becoming a regional leader in the effort to coordinate scientific study, to manage the increasing amounts of data being generated, and to encourage learning and outreach during this crucial time.”

The grant will also allow the field station to strengthen its existing partnership with The Nature Conservancy (TNC), the Dickson Mounds Museum (DMM), and the U.S. Fish and Wildlife Service (USFWS). In 2000, TNC purchased over 7,000 acres and established the Emiquon Preserve. The USFWS established 2,114 acres of lands in a conservation effort that included the Emiquon National Wildlife Refuge and adjacent Chautauqua National Wildlife Refuge. Together, the USFWS and TNC are restoring land that was largely used for row crop agriculture, back into a mosaic of shallow lakes, wetlands, bottomland forest and tallgrass prairie that is now called the Emiquon Complex. DMM is adjacent to the restored area, and has long had an active interest in the history and archeology of Emiquon.

Lemke is the principal investigator on the project and Keith Miller, associate director of the field station and computer science professor, is the co-principal investigator. For more information, contact Lemke at 217-206-7339 or mlemk1@uis.edu.
Blake Wood at Monday, August 06, 2012 No comments:
Share
‹
›
Home
View web version