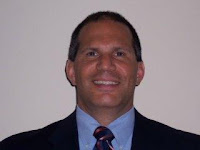 “I’m delighted that Jim Sarra is joining the UIS Leadership team as Director of Intercollegiate Athletics,” said Chancellor Susan J. Koch. “Jim’s extensive experience with all facets of Athletics and his strong focus on academic success for student-athletes are among the many strengths recognized by the search committee in their recommendation. I have every confidence Jim will lead our young Division II athletics program to even a greater success.”

Sarra topped a pool of more than 50 national candidates that applied to lead the UIS Athletic Department. He looks forward to helping the program continue to grow.

“I am so pleased to accept the Director of Athletics position, join Chancellor Koch’s leadership team, and help grow and advance UIS Athletics,” said Sarra. “This is an exciting leadership opportunity, and I look forward to getting to know the coaches and student-athletes, begin building relationships on and off campus, and settling into the community. Chancellor Koch has a dynamic vision for UIS Athletics, and I welcome the challenge to lead and advance the athletic department. I want to thank Chancellor Koch and the entire search committee for their support and I can’t wait to get started,” added Sarra.

At UTSA, Sarra was appointed deputy director of athletics in 2009. In that role, he was responsible for the day-to-day administration of the athletic department. He supervised the areas of academic services, compliance and strength and conditioning. He also served as the administrator for several sports.

Sarra has served in many different administrative roles at NCAA Division I BCS, FBS and FCS institutions. He was selected to and is a graduate of the NCAA Leadership Institute for Ethnic Minority Males and Females, and the NCAA Fellows Leadership Development Program.

Sarra will take over as UIS director of athletics on August 1. He replaces Kim Pate, who left the university in May to become the director of intercollegiate athletics at Lenoir-Rhyne University in Hickory, North Carolina.

UIS has 15 athletic programs, including baseball, basketball, cross country, golf, soccer, softball, tennis, track and field and volleyball, and is a member of the Great Lakes Valley Conference in NCAA Division II.
Derek Schnapp at Wednesday, June 22, 2016 No comments:
Share 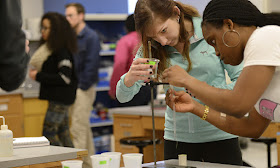 The University of Illinois Springfield has released the Dean’s List for the spring 2016 semester.


The University of Illinois Springfield is welcoming hundreds of new students to campus during its summer KickStart orientation programs in June, July and August. A total of six different orientation sessions are planned.

The two-day overnight event helps students understand UIS academic expectations and major requirements, allows them to meet with an adviser and registering for classes.

“College is not the same as high school, said Lisa McGuire, UIS director of new student orientation and parent relations. “There’s a lot more interdependence and people expecting you to be prepared and already know how to do things. Orientation is about helping them figure out what they need to do.”

Students also are given a chance to participate in fun activities, which allows them to get to know their classmates and start making friends.

“My favorite part of today is probably getting to know everyone because these are your future classmates and basically your family for the next four years,” said Aaron Shrestha, an incoming first-year student.

Alice Caceres, a fellow incoming first-year student, says she appreciates the personalized attention she received throughout her UIS orientation experience.

“It’s been a long day, but I like how they’re getting involved with us, they’re trying to connect with us,” she said. “They asked us our name and where we come from, our majors, our minors. I feel like they’re actually trying to get to know us better.”

McGuire says students will leave UIS with their fall class schedule and hopefully a better understanding of what to expect when they return in late August.

“I hope they leave feeling comfortable with the fact that they have their classes and they know what they’ll be taking next fall,” she said.
Blake Wood at Wednesday, June 15, 2016 No comments:
Share 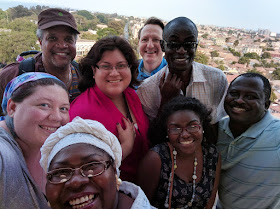 Four students and three faculty members from the University of Illinois Springfield are spending a month studying abroad in The Gambia, a small country in Western Africa. The group left Springfield on May 24, 2016, and will return at the end of June. 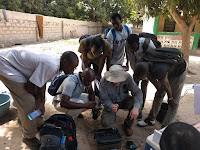 “In terms of water quality, we measured parameters for human health and environmental health, including nitrates, chromium (VI), and coliforms,” said Alamu. “We measured water from wells, a city dump, and The Gambia River. We collected bacterial samples which will be analyzed and compared with samples from the Illinois River.”

UIS faculty members are also training six undergraduates and one faculty member from The University of The Gambia in field techniques and lab chemical procedures. 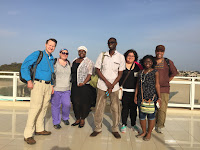 Williams is also working with Gambia Food and Nutrition Association to gain experience on food processing/preparation and its effect on the health of the Gambians.

So far, the group has traveled to many locations in The Gambia, including Banjul, Brikama, Serrekunda, Kembujeh, Tanji and Kartung.

UIS students and faculty have been traveling to The Gambia on study abroad trips since 2011.
Blake Wood at Tuesday, June 07, 2016 No comments:
Share
‹
›
Home
View web version