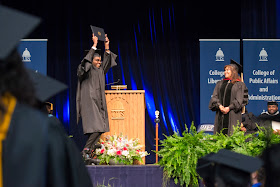 The University of Illinois Springfield will hold two commencement ceremonies on Saturday, May 12, 2018, at the Bank of Springfield (BOS) Center, Ninth and Adams Streets in downtown Springfield. Of the 1,520 UIS students eligible to graduate, 978 will participate in the ceremonies.

Tickets are not required for admission and seating will be available on a first-come, first-served basis. There is no reserved seating, except for special needs such as interpretive services and wheelchairs.

The doors to the main floor will open an hour before each ceremony. Overflow seating will be provided in the lower level of BOS Center. 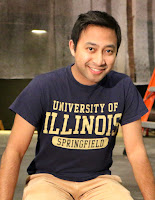 Christopher Vemagiri Marbaniang, who will be graduating with a master’s degree in public health, has been chosen as the student commencement speaker. He was born in Shillong, Meghalaya, India, but calls Tuscaloosa, Alabama home.

At UIS, Vemagiri Marbaniang has been a cast member for several UIS Theatre productions since 2015, is treasurer of the Student Government Association, chair of the Student Organization Funding Association, a senator on the UIS Campus Senate, vice president of the UIS Public Health Club, treasurer of the Kappa Beta Colony of Delta Kappa Epsilon at UIS and a worship leader for the University Bible Fellowship. He is also a member of the UIS Mock Trial team.

Since Fall Semester 2017, he has interned at the Illinois Department of Public Health as part of the Graduate Public Service Internship Program (GPSI).

Following graduation, he hopes to combine his two passions, public health and theatre, by becoming a public health educator. He has currently been accepted into several public health Ph.D. programs across the country. 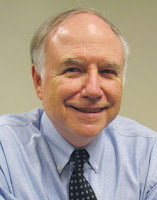 For the last 19 years of his Sun-Times tenure, Wheeler was assigned to the newspaper’s Statehouse bureau. During that time, he was elected to 16 consecutive one-year terms as president of the Illinois Legislative Correspondents Association and served for many years on the PAR program and admissions committees.

He is a graduate of St. Mary’s University, Winona, Minnesota, majoring in English, and received a master’s degree in journalism from the Medill School of Journalism at Northwestern University.

Faculty in each academic program select one graduating student who best exemplifies the goals and spirit of that program to serve as student marshal for the ceremony.

A number of events are planned for graduates, their families and guests before the ceremonies at the BOS Center. The annual Online Graduates Brunch will be held at 9 a.m. on Saturday, May 12, in the Public Affairs Center. The Capital Scholars Honors Program will also honor its graduates that day with a 9 a.m. brunch at the Student Union.

The ceremonies will be webcast live at www.uis.edu/technology/uislive/. DVD copies of the ceremonies can be purchased from the Office of Electronic Media for $25. Orders can be placed by phone at 217/206-6799 or at http://go.uis.edu/CommencementDVD.

For more information, go to the UIS Commencement website at www.uis.edu/commencement/.
Blake Wood at Thursday, April 26, 2018 No comments:
Share 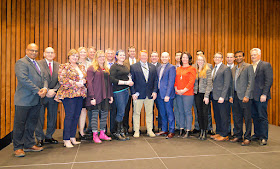 The University of Illinois Springfield, Innovate Springfield and the Southern Illinois University School of Medicine handed out eleven “Innovator of the Year” awards to organizations during the inaugural Illinois Capital Innovation Competition Awards on April 6, 2018, at the UIS Student Union.

More than 100 individual applicants applied for award consideration. The goal of the awards were to identify, celebrate and engage area innovators in the Sangamon County area and bring them together to collaborate with leaders from industry, social impact organizations and government.

Megan Luckey and Khara Koffel of Jacksonville, founders of Serious Products, received the “Innovator of the Year” award in the startup category. The two are the inventors of Serious Lip Balm, a company that hand makes all-natural lip balm out of beeswax, sweet almond oil, shea butter, lanolin and scented lip balm oil.

In the business solutions category, Barnabus Helmy of Springfield, creator of The Puck at SmashToast, was honored with an “Innovator of the Year” award. The Puck is a small device which allows smartphone control of any TV, speaker or other machine which accepts an infrared signal. One Puck can control multiple devices, allowing users to “toss the remote.”

The roots category honored innovation that has been applied outside of the area by an innovator who has roots in central Illinois. Andrew Arenz, owner of Spare Accessories, who grew up in Auburn, Illinois, won the “Innovator of the Year” award in this category. Arenz invented the patent-pending Reel Rack, the only spare tire cover that holds fishing poles securely on your spare tire.

The “Innovator of the Year” award for UIS research was presented to Yanhui Guo, Ph.D., UIS assistant professor of computer science, for his work in computer-aided microcalsifications (MC) in the detection of breast cancer using DCNN classifiers.

The “Innovator of the Year” honor in the government solutions category was awarded to the Illinois Department of Innovation & Technology’s Blockchain Initiative, which is made up of a consortium of Illinois state and county agencies. Blockchain and distributed ledger technology has the potential to redefine the relationship between government and the citizen in terms of data sharing, transparency and trust and make a leading contribution to the State’s digital transformation.

In the health care application category, the “Innovator of the Year” honor went to Dr. Gregory Mishkel and Amy Durako with the Enhanced Recovery After Surgery Program (ERAS) at Prairie Cardiovascular. As part of the ERAS program, patients can connect with their doctors through the Seamless MD app. The app is provided at no cost to patients and has resulted in a decrease length of stay for open heart surgery patients, has increased compliance with cardiac rehab and decreased use of opioids for pain management in patients utilizing the app.

Ashim Gupta, Ph.D. and Dr. Michael Neumeister with the SIU School of Medicine and Sohyung Cho, associate professor of industrial and manufacturing engineering at Southern Illinois University Edwardsville, were honored with the “Innovator of the Year” award for medical device. They invented a syringe system for fluid separation during surgery that helps reduce the time a patient is under anesthesia, as well as the time the surgeons and anesthesiologist are in the operating room.

SIU School of Medicine physicians were also honored with the “Innovator of the Year” award in the medical research category. Andrew Wilber, Ph.D. and Christopher Chambers, Ph.D. along with Jeffrey Miller developed a hemoglobin gene therapy to treat Sickle Cell Anemia and Beta-thalassemia. Each year, 300,000 – 500,000 babies are born with one of these disorders.

The awards competition was open to researchers, inventors, entrepreneurs, startups, existing businesses, institutions, social entrepreneurs, non-profits and other individuals who currently live in and around Sangamon County, who have lived here at some point in their lives, or are willing to relocate here.