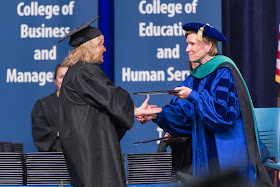 A total of 1,520 students earned degrees from the University of Illinois Springfield at the conclusion of the spring semester on May 12, 2018, pending completion of university requirements.

For photos, video and more from the 47th UIS Commencement Ceremony, visit www.uis.edu/commencement.
Blake Wood at Wednesday, May 23, 2018 No comments:
Share 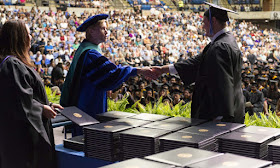 The University of Illinois Springfield held two commencement ceremonies on Saturday, May 12, 2018, at the Bank of Springfield Center in downtown Springfield. Out of the 1,520 UIS students who were eligible to graduate, 978 participated in the ceremonies.

UIS Chancellor Susan J. Koch presided over the ceremonies, welcoming thousands of guests. She offered the graduates some advice and reflected on the importance of earning a college degree from a University of Illinois campus.

“The promise that we make to our students can be summed up in two words: Leadership lived. Leadership is lived on the UIS campus every day and I trust that each of you has your own Leadership lived story as a result of your UIS experience,” said Koch. “I am supremely confident that you will indeed make a difference in the world with your leadership.”

Koch also congratulated first generation college graduates and thanked family and friends for supporting their students and encouraging them to succeed.


During the second ceremony, Koch was joined on stage by University of Illinois President Timothy Killeen who reflected on the important lessons students have learned from faculty and the future achievements that await them following graduation.

Killeen said he hopes graduates leave UIS with the principles that define the University of Illinois System in mind.

“Lead with the integrity that your time here has instilled,” said Killeen. “Speak up and speak out for fairness, for equality and for open, respectful and productive debate of divergent ideas. Go with pride and with confidence.”

The student commencement address was delivered by Christopher Vemagiri Marbaniang, who graduated with a master’s degree in public health. He has been an activate student on campus, involving himself in a number of clubs and organizations including the Student Government, the Student Organization Funding Association and Public Health Club just to name a few.

Vemagiri Marbaniang told the audience how his UIS experience changed his life and the lives of his friends for the better. As a person who is a “hybrid of different ethnicities”, he said he felt welcomed on the UIS campus.

“At UIS, one thing I loved was that I belonged here as I got a chance to embrace who I am,” he said. “We come from different cultures, backgrounds, religions, beliefs, races, ethnicities and nations. Yet, there is one common link, the passion to learn and become leaders in our communities.”

Vemagiri Marbaniang reflected on all of the fun times he’s had a UIS – late-night study tables at the library, Springfest, the friends he’s made through the University Bible Fellowship and the moments he’ll cherish from his involvement in UIS Theatre productions.

However, he also addressed the “adversity, pain, confusion, uphill climbs, and battles” that some students faced in order to earn their college degree.

“I think today we have all become leaders in our own right and are ready to face obstacles,” he said. “The thing about leaders that lead by example is that they do not lead from the front, dominating and forcing their way, but lead from behind and watch the next leaders rise. That is the essence of true leadership.”

He ended his speech with some words of advice for the graduating class “be bold, be kind, and be respectful. Congratulations and welcome to the professional world!”

Photos and more video are available at the commencement website: www.uis.edu/commencement/.
Blake Wood at Sunday, May 13, 2018 No comments:
Share
‹
›
Home
View web version