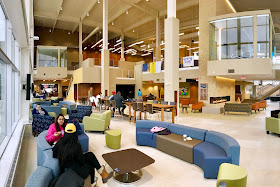 The University of Illinois Springfield’s new Student Union building was honored with a Facility Design Award of Excellence from the Association of College Unions International (ACUI) during a ceremony in Indianapolis on March 25, 2019.

According to the ACUI, the award encourages and recognizes excellence in the design of student-centered facilities that support campus community building and student learning. In reviewing the building, ACUI assessed criteria, such as the building’s connections with the community, campus and environment in which it sits. They also reviewed the planning and design process, including how the use of creative materials, input from students, and inclusion of partners shaped the project and its goals.

The UIS Student Union was designed by Workshop Architects of Milwaukee, Wisconsin & Dewberry of Peoria, Illinois to LEED® Gold guidelines, with sustainable features which include a green roof, energy efficient lighting, rainwater reclamation system and radiant flooring in select areas.

Since the building’s opening in January 2018, the Student Union has helped to energize campus life, creating a vibrant social environment in the heart of campus.

The two-story, 50,000-square-foot student union anchors the campus’s south quad, providing campus dining services, a Starbucks coffee shop, a ballroom with seating for up to 450 people and a Student Leadership Center that houses student government, volunteer offices and workspaces for student organizations.

This is the second design award for the building. In November 2018, the building was honored with an excellence in design award from the American Institute of Architects (AIA).
Blake Wood at Monday, March 25, 2019 No comments:
Share 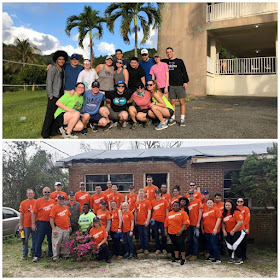 Two groups of students from the University of Illinois Springfield are spending their spring break helping to rebuild Puerto Rico and Florida, following Hurricanes Maria and Michael, as part of an Alternative Spring Break (ASB) trip. 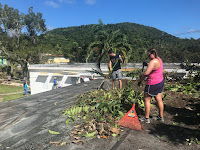 The two groups are working in partnership with Community Collaborations International (CCI). The students are helping with eco-restoration efforts, building renewable and sustainable homes and volunteering with early childhood education programs.

“After seeing the impact of last year’s trip to Texas, helping with disaster relief from Hurricane Harvey, we knew we wanted to continue with relief efforts,” said Madison Reuss, a UIS senior from Nashville, Illinois who is president of Alternative Spring Break Student Organization. “In the beginning, we thought we would only be doing a trip to Puerto Rico, but after high demand from many people wanting to get involved with ASB, we created a second trip that also would focus on disaster relief. Taking on this task and planning two trips was no easy feat, but in the end we knew it would be worth it.”

This trip marks the 11th anniversary of Alternative Spring Break at UIS. Students first traveled to South Dakota in 2008 to help Habitat for Humanity with a building project. Since then, they’ve traveled to the Florida, Louisiana, Mississippi, Tennessee and Texas helping with disaster relief, eco-restoration efforts and early childhood education programs. Students have also helped to feed the homeless at soup kitchens in Washington, D.C. and New York City. 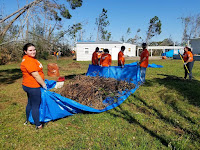 “I am excited about Alternative Spring Break this year because we were able to plan two trips and take on an international project, two things ASB has never done before,” said Ben Paoletti, a UIS sophomore from Batavia, Illinois who is vice president of Alternative Spring Break Student Organization. “The opportunity for ASB to help others has grown exponentially in 2019 and I can't wait to see our impact on the people and communities we are going to serve. I would also like to take this time to recognize all our supporters and donors because without them this trip would not be possible.”

A recent study conducted by students and faculty at the University of Illinois Springfield has found that “bedazzled” or more aesthetically pleasing recycling bins did not increase recycling behavior on the Springfield campus.

The waste management study, funded by a $3,654 PepsiCo Recycling grant, was conducted from October 1 to November 16, 2018. The researchers randomly deployed both “bedazzled” recycling bins featuring colorful nature photos with phrases, such as “thanks for pitching in,” on them and traditional blue recycling bins in main campus buildings to test their hypothesis.

“The idea for the study was built on research that found nature scenes in product marketing create a positive emotional response for consumers who are less concerned about environmental issues,” said Carolee Rigsbee, UIS assistant professor of management. “We thought positive emotions from viewing nature scenes would also increase recycling behavior, but we did not find this outcome using the bedazzled containers on the UIS campus.”

The 20 “bedazzled” recycling bins and 20 standard blue recycling bins purchased by the PepsiCo Recycling grant will still be put to good use on campus. The UIS Department of Residence Life will be deploying the recycling containers in residence halls and near townhouses/apartments to increase recycling convenience.

“Education will be a big part of this effort to increase recycling on campus,” said Marissa Jones, a UIS environmental studies major who helped conduct the study. “We’ll be working with RAs and the Residence Life leadership team during upcoming training sessions. The idea will be for them to spread the word to students and become champions for campus recycling.”

Rigsbee points out that the collaboration between students and faculty was an important part of the research study. UIS faculty members Jorge Villegas, interim associate dean of the College of Business and Administration, and Megan Styles, assistant professor of environmental studies also helped with the study.

“Even though the bedazzled bins did not prove effective, we were able to identify common forms of contamination in our recycling bins, and we're designing an education program to help eliminate confusion about these items,” said Styles. “We also found that our campus is good about recycling paper, but we really need to improve when it comes to plastics and metals.”

“Sustainability on campus is important to me because we are facing a time in which we must overcome climate change,” said Caleb Froidcoeur, a UIS environmental studies major who helped conduct the study. “UIS needs to participate in the global movement towards more sustainable practices because we aren’t just saving the Earth. We are saving our species from extinction.”

The research project, along with other student projects, will be presented at UIS’ annual Student Technology, Arts, and Research Symposium being held April 17 to 19.
Blake Wood at Thursday, March 07, 2019 No comments:
Share 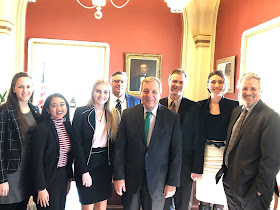 University of Illinois Springfield senior Hailey Hollinshead and Associate Professor Layne Morsch met with Illinois Senator Dick Durbin and others this week to discuss the Open Textbook Pilot program at the Department of Education.

The pilot is a $10 million federally funded competitive grant program for higher education institutions to create new and open educational resources and expand the use of textbooks to save students money.

Open college textbooks are textbooks that are freely available under an open license, allowing professors, students, researchers and others to freely access the materials.

Hollinshead was able to use an open, online textbook in her organic chemistry class, taught by Professor Morsch at the University of Illinois Springfield.

Morsch has served an integral role in securing open education resources for students. He is the Organic Chemistry Content Curator under a $5 million FIPSE grant (Fund for the Improvement of Post-Secondary Education.) He has partnered with LibreTexts, a provider of open educational resources.

“To me, it is an issue of social justice,” said Morsch. “Students with less financial resources shouldn’t be disadvantaged by not having the same textbooks that other students can afford to buy. Before I switched to open educational resources, my organic chemistry textbook cost around $300, now that I use LibreTexts it’s free.”

According to a survey by U.S. Public Interest Research Groups, 65 percent of students in 2017-2018 decided not to buy a textbook because of the cost and 94 percent of those students worried it would negatively affect their grade.

“Open textbooks provide an affordable and effective option for students and faculty," said Durbin. I look forward to working with my colleagues in Congress to build on the federal investment in open textbooks in Fiscal Year 2020.”
Angela Try at Thursday, March 07, 2019 No comments:
Share
‹
›
Home
View web version