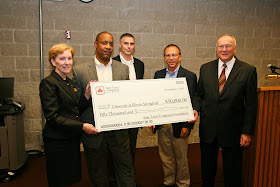 The new system will be used by the UIS Center for Systems Security and Information Assurance to host programming, cyber defense and digital forensics competitions. The UIS Computer Science Department is a partner in the National Center for Systems Security and Information Assurance funded by a National Science Foundation (NSF) Advanced Technology Education (ATE) Grant. Funding from the NSF/ATE grant will be used to fund events at UIS that utilize the equipment funded by the State Farm Grant.
Blake Wood at Thursday, November 03, 2011
Share