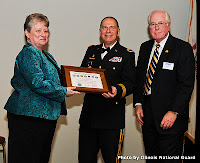 Dr. Pinky Wassenberg, dean of the College of Public Affairs and Administration at the University of Illinois Springfield was recently honored by the Illinois National Guard with the Seven Seals Award.

The award honors individuals and organizations that have provided Employer Support to the Guard, specifically to units deploying to Afghanistan. In December 2010, UIS hosted soldiers from the Guard for a day of training by UIS faculty on issues they might encounter while deployed in Southwest Asia. The day was organized by Wassenberg and Joan Sestak, UIS director of Community Relations.

“I am honored to receive this award,” said Wassenberg. “It was a privilege to be able to help our Illinois National Guard soldiers who give so much in so many ways. The award really belongs to all the faculty and staff at UIS who worked together to make that day of training a success.”

The Guard credits Seven Seals Award Recipients for going above and beyond their occupational responsibilities to make the preparation training beneficial for all involved. Support from employers is crucial for the long-term success of each citizen-Soldier and the National Guard and Reserve.

“The individuals we honor tonight provided members of the Illinois Army National Guard an expanded knowledge of how our units of government accomplish their daily operations in the critical infrastructure sector,” said Lt. Col. Tim W. Franklin, during the December 13 awards reception at the Governor’s Mansion.

During the training at UIS, faculty members helped to educate troops on Afghanistan’s history, culture, public health needs, and economic structure among other topics. The Guard approached UIS, the University of Illinois at Urbana-Champaign, the City of Springfield and Sangamon County about forming a partnership. The result was a three-day training session for about 40 soldiers called “Infrastructure 101”.