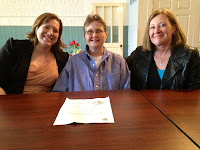 The Illinois Innocence Project, based at the University of Illinois Springfield, has helped to secure the release of Peggy Jo Jackson. In 1987, she was convicted of first-degree murder in Jefferson County, Ill. for her indirect involvement in the death of her husband William Jackson.

After serving 27 years of a life sentence without parole, Governor Pat Quinn issued an executive clemency order today, which freed Jackson from the Logan Correctional Center on parole.

“We applaud Governor Quinn for the clemency of Peggy Jo Jackson,” said Erica Nichols-Cook, lead attorney for the Illinois Innocence Project. “The release is a victory for all innocent women that have suffered from serious domestic abuse.”

The Illinois Innocence Project worked on the Jackson case for 4 years, believing she was innocent. The project was supported by the Illinois Clemency Project for Battered Women.

Attorneys for the Illinois Innocence Project argued that William Jackson was an abusive husband who violently beat and sexually assaulted his wife. After a week of abuse, Peggy Jo’s brother Richard confronted William about the abuse. Peggy Jo was convicted for not trying to prevent her brother from murdering her husband.

Jackson’s case was heard before the Illinois Prisoner Review Board in October. Governor Quinn commuted her sentence to time served.