The youngest of the five osprey chicks was the most vocal when Dr. Tih-Fen Ting and University of Illinois Springfield graduate student April Simnor approached their nesting structure to remove the ospreys' food pan. Being the youngest of five hasn't kept the bird from eating when it has the chance, unlike two of other birds that stood in the back of the structure, backs turned toward the visitors.

Dr. Ting and her students are feeding, observing, and tending to the five osprey chicks in collaboration with the Illinois Department of Natural Resources. The groups are trying to re-establish ospreys, a fish eating bird of prey, in Illinois, where they are listed as endangered. As adults, ospreys usually return to nest in the area where they were raised. The hope is that these chicks will do just that. The birds are being kept at Anderson Lake, near Havana, Illinois. 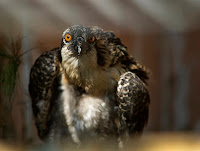 Early each morning, the students remove any remaining fish from the birds' nesting area and weigh it to determine how much was eaten overnight. They provide more food to the chicks, then hunker down on an embankment a distance from the nesting box in order to observe the birds and to confirm each of them is eating. The students spend much of their day watching the chicks and writing notes. They will continue caring for the chicks until they are ready for release. Prior to release, the birds will be fitted with tracking devices.