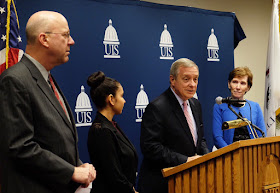 U.S. Senator Richard Durbin is pleased to announce that the University of Illinois Springfield’s Illinois Innocence Project, with the support of the UIS Center for State Policy and Leadership, has been awarded a $753,958 federal grant to clear Illinois innocence cases where DNA testing might decide the outcome of individuals who plead guilty and Latinos who might be innocent.

The award is for a United States Department of Justice Bloodsworth Grant, named in honor of Kirk Bloodsworth, the first DNA death penalty exoneration case in the U.S. in 1993.

“In Illinois, we’ve seen firsthand how innocent people can get their lives back by taking advantage of post-conviction DNA testing to solve old cases and exonerate the wrongly convicted,” said Durbin. “The Illinois Innocence Project has worked to ensure fairness and accuracy in the justice system, including directly participating in two 2015 exonerations. I particularly applaud the Project for reaching out to Latinos wrongly in prison who often, because of their minority status, find themselves without help to remedy their convictions.”

Last year, the Illinois Innocence Project assisted in the passage of a law, which for the first time in Illinois allows those convicted by a guilty plea to go to court to get evidence tested that might exonerate them because they are innocent. Senator Durbin indicated that “providing assistance in cases where someone might have pled guilty but who might be innocent points to a potentially serious flaw in our criminal justice system. It is my hope that this grant will allow the Project to bring justice to those who believed it would be better to plead guilty than to struggle to prove their innocence.”

Reaching out to assist Latinos is an important goal for the UIS innocence project.

"Almost 14% of Illinois inmates are Latino who are often wrongfully convicted due to unique barriers involving language, citizenship, and status” said John Hanlon, executive director of the Illinois Innocence Project. “We hope to address these disparities which often lead to improper convictions and create difficulties for Latino inmates by working on cases where the individual can be proved innocent through the use of DNA testing.”

The project will initially focus on numerous cases it has already screened in both areas in anticipation of receipt of this grant. The cases will be further reviewed to determine if the evidence can be tested or retested for DNA and if the likelihood is that the individual is actually innocent of the crime for which they were convicted.

“We know that DNA is the most important forensic tool to identify or exclude a perpetrator of a crime,” said Hanlon. “This grant will give the project the resources to follow up with investigation and DNA testing of the many requests we have from people who may actually be innocent."

As part of the grant, the Illinois Innocence Project will hire several UIS undergraduate students to assist in the screening, review, and evaluation of the cases.

“This new federal grant not only meets a critical need in the state of Illinois, but provides important opportunities for our students,” said UIS Chancellor Susan J. Koch. “Present and future students will continue to have opportunities to learn about injustices in the criminal justice system through education and practice in ways that other universities cannot provide. The Latino focus also reinforces our campus’ emphasis on diversity in its work, its staff, and its students.”

More information about the Illinois Innocence Project can be found on their website at www.uis.edu/illinoisinnocenceproject/.
Blake Wood at Friday, October 30, 2015
Share