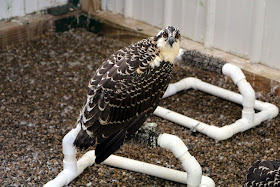 Tih-Fen Ting, associate professor of environmental studies at the University of Illinois Springfield, translocated 12 six-week-old ospreys, an endangered fish eating bird of prey, from Virginia to Illinois thanks to the help of the Illinois Audubon Society. The society contributed $3,000 to transport the birds by plane in collaboration with the aviation program at Southern Illinois University.

The birds were flown into the Decatur Airport on July 7, 2016, and were processed and tagged the following day at the Illinois Raptor Center in Decatur. Later in the day, the birds were released at two sites, one near Lake Shelbyville and the other near Canton, along the Illinois River.

“Biological diversity is important to the long-term well-being of human health and communities,” said Ting. “Efforts to recover threatened or endangered species, such as ospreys in Illinois, are necessary to keep biodiversity strong so that future generations can benefit from these wonderful creatures.”

Establishing a self-sustaining breeding population of ospreys in Illinois is one of the goals of a multi-year U.S. Fish and Wildlife grant awarded to Ting through the Illinois Department of Natural Resources (IDNR). The objective is to re-establish ospreys in Illinois where they are listed as endangered.

“We’re happy to help with this important project. This gift, I believe, will make our members proud, plus have potential to educate many more people regarding our effort to bring back this tremendous bird of prey,” said Tom Clay, executive director of Illinois Audubon Society.

Since 2013, Ting and a group of UIS students and research personnel, in collaboration with IDNR, have helped to successfully translocate and fledge 24 young ospreys from the Chesapeake Bay area. The researchers have been feeding, observing, and tending to the translocated osprey chicks at Anderson Lake, near Havana, and at Lake Shelbyville. A third site called Banner Marsh, near Canton, was added this year.

Although ospreys have a wide range of distribution in North America, the birds rarely breed in Illinois and are considered vulnerable to climate change. According to the National Audubon Society’s climate model, by 2080 ospreys are projected to lose 79 percent of their current summer range, particularly in coastal areas.

“Through translocating young birds, we can help with ospreys’ range expansion into inland lakes or rivers in Illinois,” said Ting.