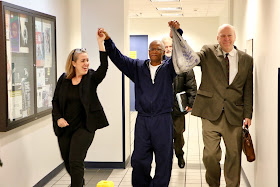 A Decatur man walked free from the Macon County Courthouse today thanks to the efforts of the Illinois Innocence Project (IIP) at the University of Illinois Springfield. Newly discovered DNA evidence proves that Charles Palmer did not commit the 1998 murder of William Helmbacher.

On November 16, a Macon County judge overturned Palmer’s conviction and life sentence for first-degree murder and awarded him a new trial. The Macon County State’s Attorney declined to retry the case on November 23.

The case was overturned after DNA evidence, which was never tested by police, including the victim’s fingernail scrapings and hair found in the victim’s hand, was tested by the Illinois Innocence Project. In both cases, the DNA was not a match to Palmer.

Helmbacher died in his Decatur apartment after suffering numerous blows to the head with a hammer. Another Decatur man, who lived in an adjoining apartment, became the lead suspect when he was arrested while carrying a plastic bag filled with the victim’s personal possessions. The man initially told the police that he knew nothing about the murder. However, after making a deal for himself whereby the murder charges were dismissed, he gave a statement to the police implicating Palmer.

The man also identified a pair of shoes “similar” to those supposedly worn by Palmer the evening of the crime. The crime lab found no evidence on them, though police said the apartment had been awash with blood. The lab returned the shoes to police, who sent them back with the request to “take them apart and check again.” This time, under layers of one shoe, three tiny spots of blood said to be from the victim were found. The evidence regarding these spots of blood would likely be inadmissible by today’s standards.

“While the police sent the shoes to the lab twice based on a supposed hunch that they should be examined again, they never sent to the lab even once the key biological evidence that had been collected at autopsy,” said Hanlon.

During jury deliberations at the April 2000 trial, the jury sent four distinct notes to the court, asking for every critical item of evidence. The jury also informed the court that they were “deadlocked”, and deliberated for 13 hours before finding Palmer guilty of murder – but not guilty of residential burglary.

A motion for DNA testing of numerous items of evidence was filed in 2010 and argued in 2011. The court permitted Palmer to test the fingernail scrapings and the hair but denied testing on all other items. The Illinois Innocence Project, through Hanlon, represented Palmer from 2011 through 2016, filing and litigating a number of motions toward deeper DNA testing of the evidence, and shepherding the evidence through various forms of testing.

“This case exemplified true teamwork by the Illinois Innocence Project,” said Hanlon. “Six UIS students, along with numerous IIP staffers and volunteers, worked on this case over the years, along with another six law school students from the University of Illinois at Urbana-Champaign College of Law.”

The DNA testing in Palmer’s case was made possible by federal grants awarded in 2010 and 2012 to the University of Illinois Springfield for use by the Illinois Innocence Project.
Blake Wood at Wednesday, November 23, 2016
Share