UIS students volunteer at nine locations as part of the national MLK Jr. Day of Service 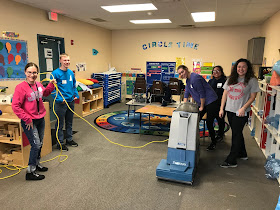 More than 100 students from the University of Illinois Springfield spent their day learning and volunteering in the community as part of the national Martin Luther King Jr. Day of Service on January 15, 2018.

Students started their day on campus with breakfast and a simulation experience, and then participated in the Springfield NAACP Unity March and a community town hall at Pleasant Grove Baptist Church.

Following the town hall, students spent their afternoon volunteering at nine locations in Springfield. Students sorted donated computers at Computer Banc, prepared items for sale at the Habitat ReStore, sorted medical supplies at Hospital Sisters Mission Outreach, painted at Inner City Mission, sorted and organized books at the Northside Children’s Community Library (located in the basement of Third Presbyterian Church), helped around the house and sorted donated items at the Ronald McDonald House, cleaned up and repaired classrooms at the Springfield Urban League and sorted and preparing art kits for patients at HSHS St. John’s Hospital Women and Children’s Center.

On campus, students made 15,000 bookmarks to be distributed to Springfield District #186 elementary students, in partnership with the United Way, during an event in the UIS Student Union Ballroom.

In 1994, Congress passed the King Holiday and Service Act, designating the Martin Luther King Jr. Federal Holiday as a national day of service and charged the Corporation for National and Community Service with leading this effort. Taking place each year on the third Monday in January, the MLK Day of Service is the only federal holiday observed as a national day of service – a "day on, not a day off."
Blake Wood at Monday, January 15, 2018 No comments:
Share 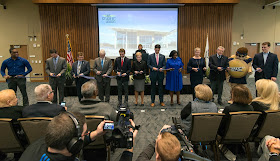 An open house immediately followed the ribbon cutting. Food Service and Starbucks will begin regular operations in the building when students return to campus for the beginning of Spring Semester 2018 classes on Tuesday, January 16.
Blake Wood at Sunday, January 14, 2018 No comments:
Share
‹
›
Home
View web version