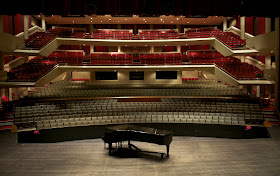 The University of Illinois Springfield Performing Arts Center, home of Sangamon Auditorium, has been awarded a $20,200 grant from the Illinois Arts Council Agency (IACA) for operational support.

The August 24, 2018 grant will be utilized to support the UIS Performing Arts Education Connections Program, in addition to providing support for artistic programming that may not be able to rely on ticket sales to cover costs.

According to IACA, the grant is designed to provide support to established not-for-profit organizations that make a significant local, regional or statewide impact on the quality of life in Illinois. Grants recognize arts programming of high quality that is appropriate to and reflective of the communities served and that broaden opportunities for the public to participate in the arts.

“It is a wonderful statement of support from the Illinois Arts Council,” said Bryan Rives, director of UIS performing arts services. “These prestigious grants are reviewed and awarded by a committee of peers in the field of arts presenting, so it is an affirmation of the work we are doing in our community.”

One of the educational components the grant will support is the Class Acts Program, a series of daytime performances for preK-12 grade students in central Illinois. Last season, nearly 15,000 students attended ten artistic, educational and high quality performances put on by national touring companies at Sangamon Auditorium.

Overall, more than 72,000 people attended UIS Performing Arts Center events during the 2017-2018 season in the 2,005 seat Sangamon Auditorium and 350 seat Studio Theatre. The Performing Arts Center hosts nearly 150 events each year, including Broadway shows, and is home to the Illinois Symphony Orchestra, the Springfield Ballet Company and the UIS Theatre and Music Programs.

The Illinois Arts Council Agency was created as a state agency by the Illinois General Assembly in 1965 through legislation sponsored by Senators Paul Simon, Thomas McGloon, and Alan Dixon. The agency is governed by up to twenty-one private citizens chosen for their demonstrated commitment to the arts and appointed by the Governor.