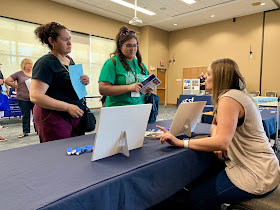 The University of Illinois Springfield will welcome hundreds of new first-year students to campus during seven KickStart Orientation sessions this summer.

The two-day overnight events help students understand UIS requirements, gives them a chance to meet their fellow classmates and learn their way around campus.

“Students get information about student accounts and billing, meal plans, financial aid and academic exceptions,” said Lisa McGuire, UIS director of new student orientation and parent relations. “They have an opportunity to interact with their peers and have a little bit of fun.”


Cameryn Hodges, an incoming freshman from Belleville, is looking forward to starting her college education at UIS.

Fatima Velasco, an incoming accountancy major from Waukegan, says she chose UIS because “it gave me the most financial aid and also it was in state.”

For other students, such as Ben Norris and Elie Krasnican, it’s hard to believe that high school is over and they’re starting a new chapter in their lives.

“It's kind of settling in, you know, I'm realizing I'm actually going here. I'm going to be walking these sidewalks soon, going to classes, so it's really hitting me,” said Norris.

“I was ready to get out of high school, so I'm really excited to come here, but just walking around and stuff it starts to, you know, like set in and I'm like oh my goodness I'm actually going to go here,” said Krasnican.

McGuire says that UIS expects a large incoming freshman class this year, which means they’ve had to add an additional orientation session.

“This will be probably our biggest first-year class ever in the history of the University,” she said. “We've only been admitting first-years since 2001. We had to open up our July 15th and 16th session and so it's already half full, so as we continue to admit students and students continue to accept admission we've got a spot for them.”