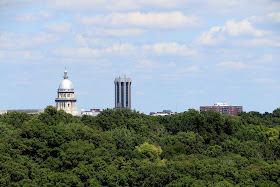 The University of Illinois Springfield Survey Research Office has released the results of the 2019 Sangamon County Citizen Survey. The survey is funded by the United Way of Central Illinois, the Community Foundation for the Land of Lincoln and the UIS Center for State Policy and Leadership.

The survey aims to establish benchmarks and evaluate changes in residents’ assessments of quality of life in Sangamon County. In addition to responses to recurring questions, the survey solicits public opinion on topical issues affecting the county.

Overall, the survey found that 52 percent of respondents think Sangamon County is headed in the right direction, compared to 62 percent in 2017. A total of 63 percent of participants said the county is an excellent or good place to live, compared to 69 percent two years ago, but similar to 2013 and 2015.

“Consistent with previous years, respondents have mixed attitudes towards the area,” said A.J. Simmons, Ph.D., director of the UIS Survey Research Office. “Some things are rated positively, such as the area being welcoming, livable and a solid place to raise kids. Folks have some concerns though. They want to see more growth in the area, both in the economy and the size of the population, and they have concerns around obesity, opioids and mental health.”

“It is disappointing to see respondent’s perceptions about Sangamon County declining 10 percentage points since 2017 and interesting that those who were not born in Sangamon County have more positive perceptions on all questions asked about the County,” said John Kelker, president and chief professional officer of the United Way of Central Illinois.

“Respondents who say they have considered moving cite lower taxes and economic development as the top two changes that could get them to stay,” said Simmons.

The survey overwhelmingly found that 89 percent of residents believe growing downtown Springfield is important to Sangamon County’s economy, while only 27 percent rate the state of Sangamon County’s economy as excellent or good. Respondents also view the region as having several challenges when it comes to retaining and attracting businesses and talented workers.

When it comes to education, 72 percent of parents surveyed think the quality of education their child receives at local schools is either excellent or good.

“The Citizens Survey is a valuable resource for ensuring that decisions we make accurately reflect local needs,” said John Stremsterfer, president and CEO of the Community Foundation for the Land of Lincoln. “I’m encouraged that the majority of respondents think that our community is welcoming, but we clearly have many opportunities to do better, specifically around retaining and recruiting talent and improving race relations.”

Results of the Sangamon County Citizen Survey are based on 652 randomly selected Sangamon County residents who were surveyed by mail on more than 60 questions across nine different areas, including: culture and recreation, social well-being, health, education, economy, gambling, government and civic participation, environment, and public safety.