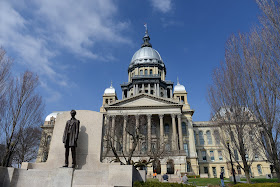 The 2019 Illinois Issues Survey conducted by the University of Illinois Springfield Survey Research Office and NPR Illinois finds more Illinois voters feel the state is headed in the right direction and that the economy is improving. Voters also rate Gov. JB Pritzker’s overall job performance at 59%.

“Perhaps surprisingly, there little variation across the different regions of the state,” said A.J. Simmons, Ph.D., director of the UIS Survey Research Office. “While nearly three in ten respondents living in Cook County (29%) and downstate (29%) say Illinois is on the right track compared to slightly under a quarter (24%) of voters in the collar counties.”

However, the survey finds the number of respondents who have considering moving out of the state in the previous 12 months has risen to slightly more than six in ten (61%) compared to 53% or respondents a year ago. Respondents ages 18 to 34 (69%) were the most common age group to say they’ve considered moving out of Illinois in the past year. The three most common reasons cited for moving by voters who have considered leaving the state are lower state taxes (27%), state government policies (17%) and better weather (15%).

“While a majority of voters say they have considered moving out of Illinois, far fewer report having taken steps to do so,” said Simmons. “Over a quarter of respondents who have considered moving out of Illinois say they’ve looked up the cost of living in another state (28%) and looked at housing in a new state (26%). However, only 2% have submitted paperwork to rent or buy housing in a new state and only 5% of these folks have applied for jobs out of state.”

The 2019 Illinois Issues Survey was designed and analyzed by the staff of the Center for State Policy and Leadership, the Institute for Legal, Legislative, and Policy Studies and the Survey Research Office at the University of Illinois Springfield. The survey was fielded from Sept. 13-23, 2019 among a sample of 1,012 registered voters as part of an online panel provided by Qualtrics. For all respondents the credibility interval is plus or minus 3.5. While a margin of error is often used to express uncertainty in polling, for online surveys credibility intervals are used to measure the accuracy, or uncertainty, of the survey.