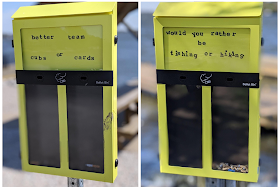 The University of Illinois Springfield Field Station at Lake Springfield has partnered with Springfield’s public utility City Water, Light, and Power (CWLP) to test the effectiveness of new “this or that” cigarette butt voting bins to curb litter near Lake Springfield.

The bright yellow bins were purchased and installed by CWLP and are stationed in three locations around the lake, Marine Point, the Lindsay Boat Launch and the boat launch just east of Spaulding Dam.

The bins encourage cigarette smokers to properly dispose of their litter by using discarded butts to cast their vote to several questions, such as “which team is better cubs or cards,” “would you rather be fishing or hiking” and “do you call it soda or pop?” After the bins fill up, the cigarette butts are collected and properly recycled.

“These ballot bins have been used around the world,” said Anne-Marie Hanson, UIS associate professor of environmental studies. “The company that produces the bins claims that studies have found the bins have reduced cigarette butt litter by 46 percent. Most of the bins have been deployed in cities on high traffic sidewalks and common areas for smoke breaks, so we are interested to see our results around the lake.”

So far, the UIS researchers have been encouraged by the results of the Lake Springfield study. Twenty-four hours after the bins were deployed they already had several cigarette butts disposed of in the voting bins.

“Cigarette butts continue to be the single most collected item in beach clean-ups and litter surveys, from central Illinois waterways to city streets to ocean coastlines,” said Hanson. “In addition to leaching harmful toxins into the environment and being mistakenly consumed by fish and birds, cigarette butts are primarily made of plastic (all those fibers in the filter are plastic).”

The UIS researchers hope the bins bring more attention to cigarette butts and remind people that they are litter and harmful to wildlife, fish and local waterways.

“Cigarette butts have become such an everyday part of the landscape, that in many situations they are not seen as litter and are assumed to be less harmful than other types of litter,” said Tom Rothfus, director of UIS field stations. “This is a very different strategy than the typical anti-litter sign, and we hope it will get people talking about cigarette butt litter in a new way.”

Rothfus says the bins will stay in place for the immediate future, but may be moved around to different locations as the UIS researchers learn more about where they are successful and where they are not.

“If there is success, the number of bins will likely be increased. We are also interested in potentially working with the City of Springfield to deploy these bins in other areas,” said Rothfus.