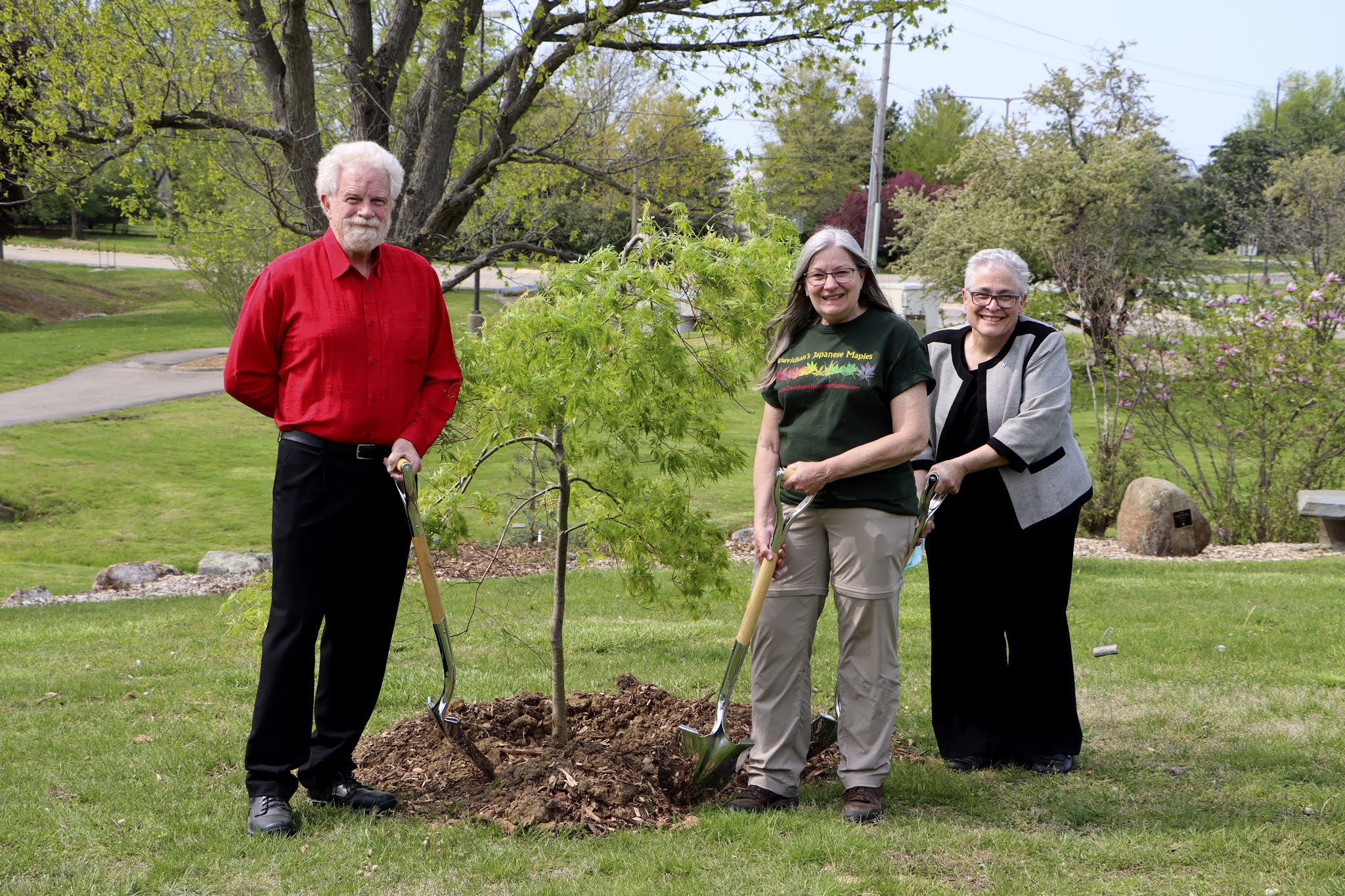 University of Illinois Springfield Interim Chancellor Karen Whitney, faculty and staff helped to plant the first of 1,000 donated Japanese maples on Tuesday, April 27, 2021 near the UIS Pond on campus.

The maples, along with a pagoda, lanterns and granite statuary, are being donated by New Berlin business Davidsan’s Japanese Maples. The business will soon be closing as owner Gale Myers prepares to retire. Davidsan’s will work closely with the UIS Grounds Department on the design of a walking path and several groves of trees.

“This donation is being made to honor more than 30 years that Springfield has had a sister city relationship with Ashikaga, Japan and 20 years of the University of Illinois Springfield’s relationship with Ashikaga University” Myers said. “I traveled with UIS to Ashikaga three times in the early 2000s. During those trips I fell in love with Ashikaga, and I have been permanently influenced by Japan, the Japanese people and their culture. I brought home the idea that the world is one community. I believe that spreading that idea will increase international understanding and the well-being of all.”

Myers hopes the trees will serve as a beautiful symbol of contemplation and inspiration, each one adding to the well-being of the people in the world community.

UIS plans to start planting the first 100 trees, and place the pagoda, near the UIS-LLCC bike trail behind the UIS Police Station, next to the campus pond. Trees will eventually cross to the other side of University Drive. Planting all of the trees will take about a year.

“UIS has had a strong relationship with Ashikaga University (formerly Ashikaga Institute of Technology), for the past 20 years. We have exchanged students, staff and faculty each year since 2001,” said Jonathan GoldbergBelle, UIS director of study away programs, who helped coordinate the tree donation. “The generous gift from Gale Myers, who participated on our program to Ashikaga several times, and Davidsan’s Japanese Maples celebrates that relationship and the impact that it can have on program participants. It will enhance the beauty of our campus and continue to delight those who stroll along the path or pause in the gardens for decades to come.”

In 2000, UIS received the Tree Campus Higher Education designation from the Arbor Day Foundation. In order to receive the designation, UIS had to form a Campus Tree Advisory Committee and come up with a Campus Tree Care Plan.

“This very generous gift will enhance the beauty of our campus for many years to come,” said Brian Beckerman, UIS superintendent of grounds. “It comes at a time when many of our original trees are succumbing to age and the elements. The plantings will greatly enhance the diversity of our campus tree population and will provide enjoyment for so many for decades to come.”

In the fall, when GoldbergBelle hopes COVID-19 restrictions have eased, he is planning to have a larger, more formal dedication ceremony for the trees. Attendees would be encouraged to stroll the path between the maples and enjoy speakers and refreshments. He also hopes to livestream the event, so UIS’ friends in Ashikaga, Japan could participate.