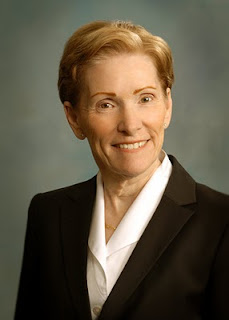 Susan J. Koch, who has served in senior leadership roles at two public regional universities in the Midwest, has been selected to become the new permanent Vice President and Chancellor of the University of Illinois Springfield.

Koch is currently Provost and Vice President for Academic Affairs at Northern Michigan University, where she has served since 2007. Before joining NMU, Koch was the Associate Provost and Dean of the Graduate College at the University of Northern Iowa.

“Dr. Koch’s record reflects a proven appreciation for the value of a strong liberal arts education and a deep commitment to civic engagement. I couldn’t be more pleased to have her joining our leadership team as we continue to advance the excellence of our Springfield campus and the entire University,” Hogan said. “I’m particularly grateful to members of our UIS search advisory committee, led by Professor Tih-Fen Ting. They did an exceptional job in recruiting an outstanding pool of candidates, and I appreciate their work and advice.”

Koch said UIS has a strong reputation that she intends to uphold. “I was drawn to the position because of the passion for excellence that is so evident at the University of Illinois and among the faculty, staff and students at UIS,” Koch said. “I am delighted to have the opportunity to work with President Mike Hogan, who is an outstanding leader in higher education.

“With its strong reputation as a public liberal arts university, UIS is providing the state of Illinois with graduates who have the knowledge, skills and values necessary to be productive contributors to and leaders of their communities,” Koch said. “I’m excited about working to continue and enhance this very important tradition.”

“We had a very strong, diverse, and highly competitive pool of applicants for the position,” Ting said. “The search advisory committee is extremely pleased that we’re able to get the person of Dr. Susan Koch’s caliber as our next Chancellor. The committee worked very hard to reach such a successful outcome.”

Koch will hold a tenured faculty position in the College of Education and Human Services at UIS. Koch’s research and scholarship are in health education, with a focus on international health, conflict resolution and human rights. She is author of numerous scholarly and creative publications and was co-founder of the Global Health Corps, a field-based organization that provides public health services to underserved populations in the U.S. and abroad.

Of her career in teaching and university administration, Koch said: “I’m an educator first and my highest priority will be students.” Koch is a native of South Dakota, where she earned a bachelor’s degree in health/physical education/biology at Dakota State University. Her first job was as a high school teacher in Waterloo, Ia. She returned to college at the University of Northern Iowa and earned a master’s degree and doctorate, both in health education. Koch joined the faculty at UNI in 1985 and moved into administration in 1995.

Northern Michigan University, located in Marquette, Mi., has an enrollment of about 9,300 with 1,200 employees and an annual operating budget of $203 million. As provost and v.p.-academic affairs, Koch is second to the president in NMU’s executive leadership and is responsible for management of the academic and student services operations. Among her accomplishments was a key role in developing and implementing the university’s strategic plan, “Roadmap to 2015,” and an initiative to fund innovation projects that support the plan.

“I’m grateful for the opportunity to have worked with an outstanding president and extraordinary leadership team at NMU, and I am looking forward to both the challenges and opportunities at UIS,” Koch said.

“My husband and I are delighted at the prospect of our move to Springfield. We’re looking forward to immersing ourselves in Abraham Lincoln’s hometown and in the activities of a university where public affairs is so central to what we contribute to the state of Illinois, the nation and the world,” Koch added. “Since my husband’s profession is agribusiness, we’re also delighted to be moving to the agriculture heartland of Illinois, and the home of the Illinois State Fair.”

Koch and her husband Dennis are the parents of four adult children.

As vice president and chancellor of UIS, Koch will report to Hogan and will be responsible for the academic programs and operations of the Springfield campus. The University of Illinois at Springfield is one of three campuses, including Urbana-Champaign and Chicago, of the U of I. It serves approximately 5,000 students in 44 undergraduate and graduate programs in four colleges, with 211 full-time faculty, 533 staff and an annual operating budget of $73 million.

Koch will take the helm of the campus from Interim Vice President and Chancellor Harry Berman. A 35-year veteran member of the UIS faculty and administration and the former provost, Berman has served in the top campus leadership role in the interim since last September.

“I'm delighted that a colleague whom I'd gotten to know at national meetings has been selected as the next chancellor of UIS,” said Berman. “I am confident that with Chancellor Koch in the leadership role the future of UIS is in good hands.”

“Harry’s legacy to this campus is outstanding, and in this nine-month interim period he is providing leadership continuity that sustains the forward progress of UIS,” Hogan said. “I value his dedication, his advice and his friendship.”