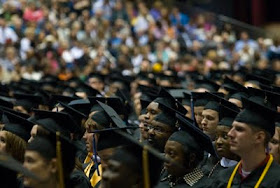 Commencement ceremonies for the University of Illinois Springfield will begin at 2 p.m. on Saturday, May 14, at the Prairie Capital Convention Center, Ninth and Adams streets in downtown Springfield. Of the 1,294 students eligible to graduate, 728 will participate in the ceremony. 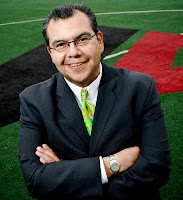 The commencement speaker will be Martin R. Castro, chairperson of the United States Commission on Civil Rights (“USCCR”) as well as chairperson of the Illinois Human Rights Commission ("IHRC") and president of a Chicago area consulting firm. In January 2011, President Barack Obama appointed Castro to the USCCR and named him chairperson in March. He is the first Latino chairperson in the history of the USCCR. The USCCR is an independent, bipartisan federal agency whose mission is to investigate complaints alleging that citizens are being deprived of their right to vote and the IHRC adjudicates individual claims of discrimination under Illinois law.

The son and grandson of Mexican immigrants, Castro was the first in his family to graduate from high school and the first to obtain a higher education. He received his B.A. in political science in 1985 from DePaul University and his Juris Doctorate degree from the University of Michigan Law School in 1988. In 2001-2002, Castro ran in the Democratic primary for U.S. Congress in Chicago’s Fourth District.

Donald E. O’Neal, professor of Management at UIS, has been chosen to serve as faculty grand marshal. The student speaker will be Charles Olivier, who will graduate with a bachelor’s degree with majors in Business Administration and Accountancy. Olivier is also the UIS Student Representative to the University of Illinois Board of Trustees.

A number of events are planned for graduates, their families and guests, beginning with a reception for Peoria-area students on Friday, May 6. Separate brunches for CAP Honors graduates and online degree graduates are scheduled for Saturday morning, May 14.

The ceremony will be webcast live at www.uis.edu/technology/uislive.html. DVDs ($25) can also be ordered from the Office of Electronic Media, phone 217/206-6799.
For more information, go to the UIS Commencement website at www.uis.edu/commencement/.
Blake Wood at Thursday, April 28, 2011
Share