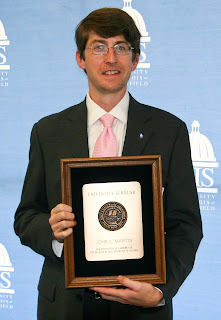 John Martin, assistant professor of Astronomy and Physics at the University of Illinois Springfield has been named University Scholar for 2011. He is the only UIS faculty member chosen for this award honoring and rewarding outstanding teachers and scholars at the three U of I campuses.

In astronomy, Martin studies supernova imposters and the end stages of the most massive stars. He was recently awarded a $62,096 grant over three years from the National Science Foundation to study Eta Carinae, the nearest supernova imposter. In addition to his research, he is an excellent example of the teacher-scholar model in action at UIS.

“While still at a relatively early stage in his academic career, he has nonetheless been a very productive scholar, and his research has already generated significant recognition within his field,” said Lynn Pardie, UIS interim vice chancellor for academic affairs and provost.

Martin has had articles published in several top-tier journals in his field and has delivered numerous professional presentations on his research in professional and academic venues. His work has also been featured in widely circulated mainstream publications, including the magazine Astronomy.

In addition to course development, teaching, research, and professional service activities both on and off-campus, Martin directs the campus’ research observatory. He is known as an enthusiastic and energetic champion of astronomy, constantly striving to encourage both student and public interest in the field, and he is a mentor of student research. Martin’s educational outreach activities include hosting public observatory Star Parties at UIS, which are held in the spring and fall each year.

“As noted in letters from academic peers, the quality of Martin’s scholarship and research achievements thus far are praiseworthy and exemplify the ideals of the University Scholar award,” said Pardie.

Martin holds a B.A. in Astrophysics from the University of Virginia and a Ph.D. in Astronomy from Case Western Reserve University.

As University Scholar, he will receive $10,000 a year for three years to support research and other scholarly activities. Faculty do not apply for this award; they are nominated by their peers. A committee of senior faculty makes the final selection.

For more information on the award, contact Derek Schnapp, director of public relations at 217/206-6716 or email dschn3@uis.edu.
Blake Wood at Friday, October 14, 2011
Share