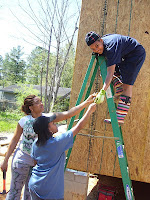 A group of students from the University of Illinois Springfield will spend their spring break volunteering in New Orleans, a city still recovering from the devastation of Hurricanes Katrina, Rita and Gustav. Students will focus their efforts on helping to build houses and community gardens.

The 21 undergraduate students, 1 staff member, and 2 advisers will leave Springfield on Sunday, March 11 at 6 a.m. and return to campus on Sunday, March 18 between 8 and 10 p.m. Students will work with HisHands2Go (HH2G), an organization created shortly after Hurricane Katrina to facilitate the continued need for volunteers. HH2G will arrange housing and food for the UIS students and coordinate work projects. The goal of the organization is to put people back in their homes.

“It has been nearly 7 years since the devastating hurricanes hit the gulf coast, but there’s still a lot of work to do, and we’ve got a group that is willing to do it," said Paige Heiser, a student volunteer and vice president of the UIS Alternative Spring Break group. “We can build one more house, create one more community garden, and that is one less thing New Orleans will have to worry about.”

Alternative Spring Break at UIS is a student-driven effort. The students choose the location, organize the logistics, and raise necessary funds. Students fill out applications to go on the trip and must be dedicated.

“This time of year, thousands of students across the country will head to the beach or spend a week chasing MTV to Las Vegas, but these students have chosen to return to Louisiana and work towards making a difference in an under-resourced neighborhood that continues to struggle with the aftermath of natural disaster. I think that speaks to the character of our students and the role of service at UIS” said Mark Dochterman, director of the UIS Volunteer & Civic Engagement Center.

The UIS Alternative Spring Break student organization was formed in 2009 when students took their first trip to Mandeville, Louisiana to help build homes for Habitat for Humanity following Hurricane Katrina. In 2010, students traveled to Galveston, Texas to help clean up damage from Hurricane Ike, which struck in 2008. Last year the students traveled to Nashville, Tennessee to help clean up portions of the Mississippi River.