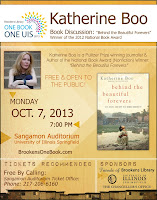 The University of Illinois Springfield is sponsoring its first “One Book, One UIS” initiative this fall with Behind the Beautiful Forevers by Katherine Boo as the book that the community is invited to read.

The initiative is being coordinated by UIS Brookens Library and is supported by funds from Friends of Brookens Library, the Chancellor’s Office, the Diversity Center, and the ECCE (Engaged Citizenship Common Experience) Speakers Series.

“One Book, One UIS” will culminate with a lecture by Katherine Boo on Monday, October 7 at 7:00 p.m. in Sangamon Auditorium. The program will be free and open to the public, although tickets will be required and can be obtained through the UIS Sangamon Auditorium ticket office by calling 217/206-6160. A book signing will immediately follow the lecture.

The kick-off event for “One Book, One UIS” will be the screening of the film Salaam Bombay by acclaimed Indian director Mira Nair (Monsoon Wedding, The Namesake). The film, which chronicles the day to day lives of children living on the streets of Bombay, will be shown on September 6 at 7:00 p.m. in UIS Brookens Auditorium as the first offering in the UIS Foreign & Independent Film Series.

In addition to Boo’s lecture, a panel of UIS faculty members will look at the issues raised by the book from a variety of disciplinary perspectives, including women’s studies, communication, politics, and the global economy. The panel discussion will occur on two occasions: Wednesday, September 25 at 12:30 p.m. in the North Carnegie Room of the Lincoln Public Library (326 S 7th St., Springfield, Ill.) and Tuesday, October 8 at 7:00 p.m. in Brookens Auditorium on the UIS campus.

Students, faculty, staff and Friends of Brookens Library are invited to participate in one of three book discussions leading up to Boo’s lecture. At least seven faculty members have adopted the book for their courses during fall semester. Details of all “One Book, One UIS” events may be found at www.brookensonebook.com.

The Indian Student Association at UIS has been inspired by the “One Book, One UIS” initiative to raise money for a school in Mumbai. Details of that fundraising effort will be posted on the initiative’s website.

Behind the Beautiful Forevers won the National Book Award for Nonfiction in 2012, was shortlisted for the Pulitzer Prize, and appeared on a host of “best book” lists for 2012. The book is an account of the lives of the inhabitants of Annawadi, a Mumbai slum in the shadows of luxury hotels and the international airport. Katherine Boo followed the lives of several key residents of Annawadi as the global economic downturn in 2008 and 2009 added to the tensions that already existed over issues of religion, caste, and gender. Her portraits are compelling, sometimes heartbreaking, and offer insight into globalization at the personal level in one of the 21st century’s great, unequal cities.

Katherine Boo is a staff writer at The New Yorker and a former reporter and editor for The Washington Post. She learned to report at the alternative weekly, Washington City Paper, after which she worked as a writer and co-editor of The Washington Monthly magazine. Over the years, her reporting from disadvantaged communities has been awarded a Pulitzer Prize, a MacArthur “Genius” grant, and a National Magazine Award for Feature Writing. Boo has said about her work: “Very little journalism is world changing. But if change is to happen, it will be because people with power have a better sense of what’s happening to people who have none.”