The University of Illinois Springfield hosted the 38th annual International Festival on November 13, 2015, at The Recreation and Athletic Center (TRAC) on campus. The theme of the festival was "World at a Glance”.

The festival gives international students a chance to share their cultures with fellow students and members of the Springfield community. The festival featured food and entertainment from several African nations, China, India, Ireland, Peru, Scotland and Middle Eastern countries.

“We’re very lucky to have a number of great performers,” said Kim Omachinski, UIS director of International Student Services. “They will be singing, dancing and playing musical instruments. Really great performances from around the world.”

Sid Modali came to UIS from India to study Management Information Systems. He says events, such as the International Festival, are important because they allow him to share his culture.

“It is very important that people from different backgrounds, different cultures and different countries come forward,” said Modali. “Everything about this is so diverse.”

The International Festival is the longest running student event at UIS. Organizers hope that the festival encourages people to try new things.

“It’s great to have it here at UIS, where we’re able to show a global community right here locally in Springfield. People can have a taste of around the world in just a few hours and hopefully inspire them to get out and try other places or do some travel,” said Omachinski.
Blake Wood at Monday, November 16, 2015 No comments:
Share 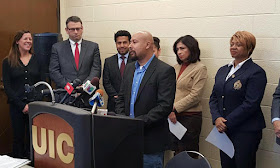 The University of Illinois Springfield’s Illinois Innocence Project (IIP) has announced the formation of the Latino Innocence Initiative. The purpose of the Initiative is to address unique vulnerabilities that Latinos face that lead to wrongful conviction of the innocent and difficulties in obtaining exoneration.

Reaching out to assist Latinos as part of its work is an important goal for the UIS innocence project.

"Almost 14% of Illinois inmates are Latinos who are often wrongfully convicted due to unique barriers involving language, citizenship, and status” said John Hanlon, executive director of the Illinois Innocence Project. “We hope to address these disparities which often lead to improper convictions and create difficulties for Latino inmates through working on their cases, encouraging understanding of the reasons for their treatment, and developing a reform agenda to minimize such wrongful convictions.”

This will be an ambitious undertaking that will need generous support from the community. Last week, Senator Richard Durbin announced a federal grant award for IIP to focus on those cases involving the wrongful conviction of a Latino where DNA might result in an exoneration. As part of that award, IIP will be hiring a bi-lingual attorney in the Chicago area to work on those cases.

IIP’s latest exoneree, Angel Gonzalez, encouraged the formation of this Initiative. Gonzalez, himself, was wrongfully convicted over 20 years ago due to a confession and identification that occurred as a result of his Latino heritage. “This is an important step in helping those Latinos who were convicted but are innocent,” Gonzalez said.

Researchers at the University of Illinois Springfield are using crowdfunding for the first time to support their research. Money raised will be used to study Hepatitis C in the central Illinois homeless population.

The two professors plan to test members of the homeless populations in Bloomington, Champaign, Decatur, Peoria and Springfield to determine the number of people infected with the virus and conduct RNA genotype testing to study the transmission of the disease.

“It is our hope that timely and effective treatment of Hepatitis C in the homeless population could potentially stop further virus transmission,” said Kanwal Alvarez, UIS assistant professor of biology.

Alvarez and Josiah Alamu, UIS associate professor of public health, are leading the study along with Dr. Janak Koirala, chief of the Division of Infectious Diseases at the Southern Illinois University School of Medicine in Springfield. They are supported by several graduate and undergraduate students at UIS.

In order to fund their research, they must raise at least $500 with the ultimate goal of raising more than $2,000 by mid-December.

“It’s unusual to ask the public for direct help in funding our research,” said Alamu. “However, the research we are doing is very expensive. It costs almost $20 just to test one homeless person for Hepatitis C.”

Money raised through the crowdfunding effort will be used to purchase rapid testing kits and other equipment needed to conduct the research.

“There’s no question the research we are doing will benefit the central Illinois homeless population,” said Alvarez. “A majority of individuals with acute Hepatitis C don’t know they are infected and are never diagnosed, which poses a greater threat to public health.”

“This type of scientific research has the potential to encourage early identification of homeless and impoverished individuals who are positive with Hepatitis C and thus refer them to seek appropriate health care,” said Alamu.

If you would like to help support Hepatitis C research in the central Illinois homeless population, you are asked to donate at http://go.uis.edu/homeless/. 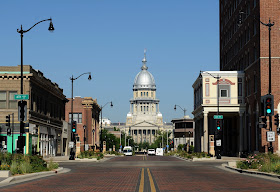 The Fall 2015 Economic Outlook Survey, conducted by the University of Illinois Springfield and the Greater Springfield Chamber of Commerce, finds that a majority of local employers think that the state budget impasse is one of the biggest challenges facing them over the next twelve months.

“It is clear that local employers are concerned about the state budget impasse,” said Ashley Kirzinger, director of the UIS Survey Research Office. “While local businesses are still reporting positive expectations for the next year, these expectations are clearly moderated by what is happening in the capitol building.”

“While the results are disappointing, we’re not surprised given the lack of a budget deal at the State Capitol, said Chris Hembrough, president and CEO of the Greater Springfield Chamber of Commerce. “Our spring survey revealed our best results in eight years. However, after nearly five months with no state budget, it’s understandable that while the majority of employers are still optimistic about the future, they’ve scaled back their expectations, at least until a budget deal has been completed.”

The fall survey results are from 263 local organizations who were contacted between September 28 and October 15, 2015 by interviewers at the UIS Survey Research Office. The margin of error for this project is plus or minus 5.4 percentage points. For more information on the methodology and the full report, please visit the UIS Survey Research Office website at www.uis.edu/surveyresearchoffice.

Questions regarding the survey may be directed to Ashley Kirzinger, director of the UIS Survey Research Office, at 217/206-7956 or akirz2@uis.edu.
Blake Wood at Monday, November 09, 2015 No comments:
Share 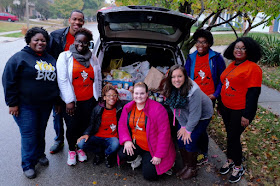 Hundreds of University of Illinois Springfield students helped to collect 9,000 pounds of food for the Central Illinois Foodbank on Halloween night from approximately 6,800 Springfield homes.

This year, Hy-Vee on MacArthur Boulevard has pledged to match donations, making the total contribution 18,000 pounds of food.

Teams of UIS students went door-to-door in several Springfield neighborhoods collecting the canned goods. Earlier this month, the teams canvassed the neighborhoods and distributed door hangers that explained the project.

For more information, or if you have food that was not collected, please contact the UIS Volunteer Center at 217/206-7716 or volunteer@uis.edu.
Blake Wood at Monday, November 02, 2015 No comments:
Share
‹
›
Home
View web version