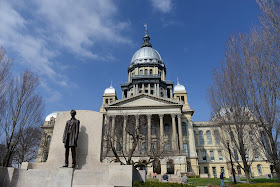 The University of Illinois Springfield has teamed with The Volcker Alliance to help conduct a national multiyear study aimed at improving budgeting and fiscal sustainability in all 50 states.

A team of researchers from the UIS Center for State Policy and Leadership, including Public Administration Professor Beverly Bunch, Associate Professor of Economics Patricia Byrnes, and a doctoral student, will gather data on several state governments. Data collected on all 50 state governments by universities across the nation will provide the Alliance with the basis for evaluating state budgeting and financial reporting performance in areas including clarity and integrity.

“The Truth and Integrity in Government Finance Project”, as the study is known, will lay the groundwork for governors, legislators, civic organizations, and citizens concerned about fiscal stewardship to effect meaningful improvements in the quality and transparency of state budgets in a time of fiscal stress for many governments.

“Understanding state budgets and financial reporting is challenging, even for those of us who teach and study these issues,” said Bunch. “This project provides an opportunity to take a closer look at current practices among the states and identify areas that need improvement.”

The nonpartisan Volcker Alliance was launched in 2013 by former Federal Reserve Board Chairman Paul A. Volcker to address the challenge of effective execution of public policies and to help rebuild public trust in government.

“Trust in government is at a low point,” said Volcker, “and part of the reason is that the public cannot even tell what our government can afford. Accounting may be complicated, but governments have an obligation to the public to reveal what services cost, how much money is borrowed, where there are shortfalls, and what tradeoffs society will face to balance the budget. This project aims to show the way.”

“The Truth and Integrity in Government Finance Project” is made possible in part by grants from the Peter G. Peterson Foundation and the Laura and John Arnold Foundation. The Alliance anticipates releasing its next round of analysis in 2017, identifying state budgeting and financial reporting practices that need improvement and providing concrete examples of best practices.