UIS students collect a record 14,085 pounds of food for the Central Illinois Foodbank on Halloween night 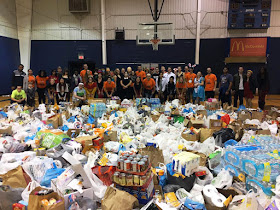 Hundreds of University of Illinois Springfield students helped to collect a record 14,085 pounds of food for the Central Illinois Foodbank on Halloween night. The total breaks a previous Trick-or-Treat for Canned Goods record of 11,620 pounds of food collected in 2014.

A total of 18 teams, consisting of 181 students, went door-to-door in several Springfield and Chatham neighborhoods collecting the canned goods.

Earlier this month, the teams canvassed the neighborhoods and distributed door hangers that explained the project. Collected items were returned and weighed on campus. Prizes were awarded to the teams that collected the most food.

The Central Illinois Foodbank distributes over 9 million pounds of food annually to over 150 food pantries, soup kitchens, residential programs and after-school programs in a 21 county region.

Also this year, the UIS Cox Children’s Center participated in the fun by having the children in costume Trick-or-Treat for Canned Goods at on campus departments. The children collected 365 pounds of food which was donated to UIS Cares, a new food pantry on campus open to all UIS students in need.

For more information, or if you have food that was not collected, please contact the UIS Volunteer Center at 217/206-7716 or volunteer@uis.edu.
Blake Wood at Tuesday, November 01, 2016
Share