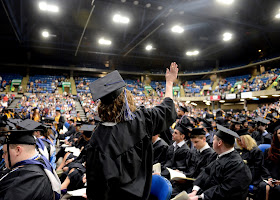 The University of Illinois Springfield will hold two commencement ceremonies on Saturday, May 13, 2017, at the Prairie Capital Convention Center, Ninth and Adams Streets in downtown Springfield. Of the 1,836 UIS students eligible to graduate, 1,270 will participate in the ceremony.

Tickets are not required for admission and seating will be available on a first-come, first-served basis. There is no reserved seating, except for special needs such as interpretive services and wheelchairs.

The doors to the main floor will open an hour before each ceremony. Overflow seating will be provided in the lower level of The Center.

During the second ceremony at 5:30 p.m., Edgar J. Curtis, president and chief executive officer of Memorial Health System, will be honored with an honorary doctor of humane letters. Curtis was nominated by the UIS Department of Allied Health for his outstanding and innovative leadership in health care administration as well as his sustained and exceptional community service.

“Mr. Curtis’ strategic direction has made the Memorial Health System of central Illinois a premium healthcare destination,” the award states. “Mr. Curtis’ outstanding and innovative leadership at both MHS and in the civic arena has raised the quality of life for the Springfield area and surrounding regions.”

Curtis has led Memorial Health System and its seven affiliates since January of 2008, providing senior-level administrative leadership for the overall strategic direction of the health system. Under his leadership, the health system’s annual revenue has grown from $500 million to $1 billion.

In 2014, Memorial contributed $2 million and entered into a partnership with the University of Illinois Springfield and the University of Illinois Chicago College of Nursing to bring UIC’s Bachelor of Science in Nursing program to the UIS campus. In 2016, Memorial Medical Center was the only hospital in the nation, and the first in Illinois, to receive the American Hospital Association Quest for Quality award. Also in 2016, Memorial Medical Center received two of four Illinois Health and Hospital Association Quality Excellence Achievement Awards.

Curtis serves on numerous healthcare boards and is currently chair of the Illinois Health and Hospital Association Board. He has served Springfield in leadership roles with several community organizations, including the Springfield Urban League, United Way of Central Illinois and Central Illinois Foodbank.

Curtis received his masters of business administration degree from the University of Illinois at Urbana-Champaign and his bachelors of science degree in nursing from Southern Illinois University Edwardsville. He began his career as a registered nurse.

Kristi Barnwell, assistant professor of history, has been chosen to serve as grand marshal. The student speaker will be Alexander William Camp, who will graduate with a master’s degree in public affairs reporting.

A number of events are planned for graduates, their families and guests, including a reception for Peoria-area students on Friday, April 28. Separate brunches for CAP Honors graduates and online degree graduates are scheduled for the morning of Saturday, May 13.

The ceremonies will be webcast live at www.uis.edu/technology/uislive/. DVD copies of the ceremonies can be purchased from the Office of Electronic Media for $25. Orders can be placed by phone at 217/206-6799 or at http://go.uis.edu/CommencementDVD.