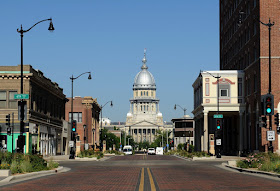 The University of Illinois Springfield Survey Research Office has released the results of its 2017 Sangamon County Citizen Survey. Results were previewed at the Citizens Club of Springfield meeting on Friday, July 28. The survey — the third in a planned series of five — aims to establish benchmarks and evaluate changes in residents’ assessments of quality of life in Sangamon County. In addition to responses to recurring questions, the current survey solicits public opinion on topical issues affecting the county.

Regarding the local economy, just 20% say they are financially “worse off” now compared to a year ago today while 24% say they are “better off” today. However, respondents are less optimistic about local business conditions – 46% say these are “worse off” now than compared to a year ago while just 4% say they are “better off.” Thirty-six percent say they have considered moving out of or away from the county in the past year which is the same percentage as the last time the survey was administered in 2015.

The survey is sponsored by the Community Foundation for the Land of Lincoln, the United Way of Central Illinois, and the Center for State Policy and Leadership at UIS. The full report contains responses to all questions including open-ended questions. The results are from 746 respondents from across Sangamon County. The data are weighted by gender, race, age, and education to match estimates provided by the U.S. Census Bureau. The survey was administered via mail using address-based sampling. The margin of sampling error is +3.8% at the 95% confidence level, but this margin will increase when examining subgroups.