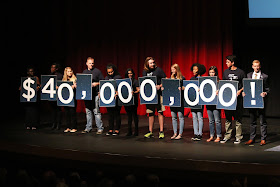 “At the University of Illinois, we have one goal at the core of our mission: to transform lives and serve society,” said UIS Chancellor Susan J. Koch. “This fundraising campaign is a strategy for taking UIS—with donors’ help—toward greater excellence and greater impact for our community, our state and beyond.”

The goal of the campaign is to raise $40 million to benefit students, faculty and the Springfield community. As of October 10, 2017, the University of Illinois Foundation had received commitments of more than $18.4 million in gifts, grants and pledges, according to Jeff Lorber, UIS vice chancellor for advancement. The campaign will continue through 2022.

The UIS Center for Lincoln Studies, a campaign priority, will be a national base for scholarship, teaching and public history about Lincoln’s life, leadership and legacy. It will incubate and sustain university-community collaborative projects, connecting UIS students with myriad opportunities available locally in Springfield, as well as connecting Lincoln to a national and international context.

Other campaign priorities include: scholarships; academic excellence; facilities and technology, including the new Student Union; and programs that contribute to the public good. These programs include outreach into the community, such as NPR Illinois, the Illinois Innocence Project, Sangamon Auditorium and others.

“UIS is crucial to the formula that has made the University of Illinois System synonymous with excellence,” said University of Illinois President Timothy J. Killeen at the campaign kickoff. “It is a place where students thrive in an intimate setting, and then move on to share those talents to lift the workforce and their communities.”

“As we begin this new campaign, only a few years from the University’s 50th anniversary, the prospects for this institution of higher education and its effect upon our community are limitless,” said Morse.

“This campaign is as important to the greater Springfield area as it is for the University,” said Bunn. “I’m excited to see UIS thrive through support from the University’s many alumni and friends.”
Blake Wood at Tuesday, October 10, 2017
Share