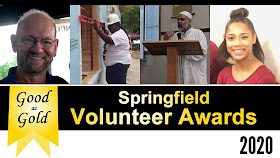 The University of Illinois Springfield, Junior League of Springfield and the United Way of Central Illinois honored more than 50 Sangamon County volunteers and businesses during the virtual 12th annual Good as Gold Ceremony. The winners were announced in a video released Monday on the UIS Volunteer and Civic Engagement Center’s website.

The Good as Gold Ceremony was started in 2008 to honor people, businesses and organizations who freely give their time and talents to make Sangamon County a better place to live. 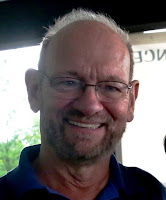 Morton was one of the key individuals in Springfield to advocate for those suffering from HIV and AIDS at a time when such advocacy was not popular. He helped establish the Springfield AIDS walk and supported the establishment of the Springfield AIDS Resource Association. Morton is actively involved in coordinating fundraising, outreach, and mentoring efforts to the Coalition of Rainbow Alliances (CORAL) organization, including an annual fundraising event that raises CORAL more than $20,000 annually.

For Acorn Equality, Morton is a sponsor of two scholarships providing opportunities for students to gain access to college. He is instrumental in planning key fundraising events including Trivia Nights and the Annual Art Auction for Fifth Street Renaissance.

Morton has donated more than $10,000 to the renovation of the Hoogland Center for the Arts. He and his husband, Lee Korte, were one of 16 couples who sued the state of Illinois for the right to marry 2013. They have been true trail blazers that have impacted lives of numerous people. 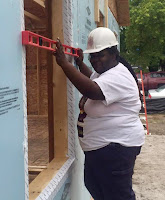 University of Illinois Springfield junior social work major Sundae Johnson of Springfield was honored with the Star Student Award for her volunteer efforts. She was nominated by St. John's Evangelical Lutheran Church and Habitat for Humanity.

She is also an active member of St. John's Evangelical Lutheran Church. Within her Church, Johnson is a singer in the praise band and leads the monthly “God’s Girls” Bible Study.

With her training as a Stephen Minister, she offers prayer, encouragement, listening, and support to members in their time of need. Johnson also serves on the Dismantling Racism Committee, which works to identify and address the issues of diversity in the congregation.

Despite obstacles while growing up, Johnson has managed to stay positive and has provided a good home for herself and for her son. She has compassion for those who are hurting and a willingness to reach out to those who need her help. Whether she is helping to plan activities or service projects as a member of the Family & Youth Ministry Team, visiting a church member as a Stephen Minister, or serving on a committee, Johnson gives her all to any project she undertakes.

Finalists for this award include Ben Paoletti and Luigi Cabantog. 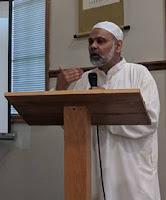 Ali Nizamuddin of Springfield, associate professor of political science at the University of Illinois Springfield, was honored with the Star Staff Award for his volunteer efforts in the community. He was nominated by Habitat for Humanity of Sangamon County.

According to the organization, Nizamuddin has been a wonderful partner in connecting them with the Muslim community, adding that he is dedicated to his faith, members of the Islamic Society of Greater Springfield (ISOGS) and the Springfield community in general.

Nizamuddin helped to partner an interfaith build with Habitat, and was an important part of the organization, discussion and implementation of the committee for this build. He engaged the Muslim community in all aspects of this projected build – even organizing the volunteers from ISOGS to assist with the slight 'refreshing' of a house that was turned back to Habitat. Habitat and ISOGS volunteers worked side by side to complete the renovation.

Because of Nizamuddin and members of ISOGS, the new homeowner was able to move into a handicap-accessible home that fit his needs. 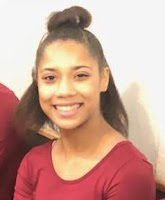 Jaylynn Adina Rynsburger of Springfield was honored with the Youth Volunteer Award. She was nominated by the Boys & Girls Club at Saint Patrick’s Catholic School.

As a youth mentor at the after-school enrichment program, she volunteers twelve hours each week as a teaching assistant with the kindergarten students. She shares her talents with students who truly need role models in their lives.

“Her sense of dedication, consistency, and affection are nurturing to all students. The students look up to her as a trusted friend,” said her nominators.

The winner of the 2020 Organization Agent of Service Award is Eta Psi Sigma Chapter of Phi Beta Sigma Fraternity Inc.

In addition to awarding $4,000 in scholarships to area high school seniors, the Chapter also hosts the Sigma Beta Club (SBC) for 15 young men, ages 12 through 18. The SBC participants are mentored and tutored throughout the year to become the next generation of leaders.

The men of Phi Beta Sigma are college educated and come from various careers including physicians, lawyers, business owners, state administrators, law enforcement, educators and school administrators. These men serve as role models and much needed counselors, mentors and sources of inspiration.

A total of 12 Sangamon County businesses were named to the Business Honor Roll sponsored by the UIS College of Business and Management. The honor roll recognizes businesses that have made giving back to our community a priority.

Three businesses were listed at the top of the honor roll as Golden Distinction Winners, including AlignLife of Springfield Chiropractic & Natural Health Center; Kerber, Eck, and Braeckel; and Bank of Springfield.