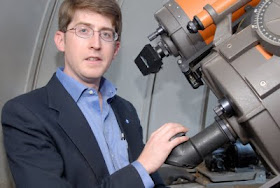 The National Science Foundation has awarded John Martin, assistant professor of Astronomy/Physics at the University of Illinois Springfield a $62,096 grant over three years to study supernova imposters and the end stages of the most massive stars.

Part of the research will take place at the UIS Henry R. Barber Research Observatory, located west of Springfield and will involve undergraduate students. Professor Martin will collaborate with researchers at the University of Minnesota to observe and model the stages of some of the most massive stars in the universe.

The star Eta Carinae is an example of a supernova imposter in our own galaxy. In the 1840s, Eta Carinae had a great eruption making it one of the brightest stars in the nighttime sky for almost a decade. More recently, searches for supernovae in other galaxies have turned up supernova imposter candidates that behave in a similar way, leading astronomers to wonder if this is a common stage for massive stars on their way to becoming true supernovae.

Massive stars are often hundreds of times larger than our own sun and produce such extreme pressures and temperatures that they manufacture all of the elements heavier than helium in the universe. The atoms manufactured in supernova are necessary for the formation of planets and origin life on Earth.

“The silicon in the Earth’s crust, the calcium in your bones, and the iron in your blood were created deep in the heart of massive stars before they exploded as supernova,” said Martin. “While astronomers have observed many supernovae, we know less about the stages preceding the terminal explosions that disperse the elements within the stars throughout the galaxy.”

The National Science Foundation grant is being matched with funds from community donations, which will allow for the purchase of new equipment at the Barber Observatory to monitor massive stars in neighboring galaxies. The grant also includes funds to support undergraduate student research and the development of educational tools to help teach about supernova imposters.

For those interested in studying astronomy, UIS offers several introductory general education astronomy classes designed to teach students the fundamentals of science and foster interest in the stars. Upper-division astronomy courses are also offered for more advanced students. Students pursuing a major or minor in Chemistry at UIS have the option of research in astronomy as part of their degree.

For more information on the grant, contact Blake Wood, UIS Campus Relations at 217/206-6716 or email bwood8@uis.edu.