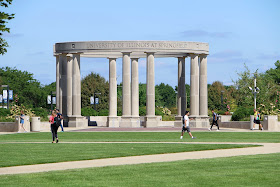 The University of Illinois Springfield has been ranked the fourth best public university in the Midwest Regional category and the top public regional university in Illinois by U.S. News & World Report in 2020 rankings released today.

Overall, UIS moved up three spots among public universities in the Best Regional Universities – Midwest category this year, having been ranked seventh in the 2019 rankings.

“UIS’ outstanding faculty and staff are committed to providing every student with a premier educational experience both in and out of the classroom,” said UIS Chancellor Susan Koch. “This prestigious ranking reflects the positive impact of our outgoing investments to enhance the academic quality and reputation of the University.”

According to U.S. News & World Report, some of the factors it looked at in determining the ranking include retention and graduation rates, faculty resources (such as class size and faculty salary), academic reputation, financial resources available to students, how well students performed academically in high school (including ACT/SAT and high school percentile rank) and alumni giving.

“Our students – a dedicated mix of first-time freshmen, returning and working adults, transfer, graduate, international, online, resident and commuter scholars – bestow this honor on us by seeking out UIS to transform themselves, each other, their families and communities,” said Natalie Herring, UIS associate provost for enrollment management.

UIS was also ranked as one of the best ethnically diverse campuses in the Midwest category with an overall Diversity Index of 0.50. According to U.S. News & World Report, the closer a school's number is to one, the more diverse the student population. The data was drawn from UIS’ fall 2018 total undergraduate student body.

For more information on the UIS rankings, contact Derek Schnapp, director of public relations, at 217-206-6716 or dschn3@uis.edu.
Blake Wood at Monday, September 09, 2019
Share