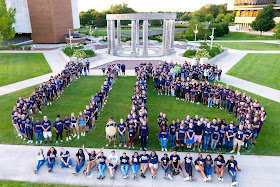 Freshman enrollment at the University of Illinois Springfield grew by more than 18 percent according to Fall Semester 2019 census numbers released today. The total number of first-year students stands at 373, compared to 316 last fall semester, making it the largest incoming freshman class in school history.

“We are pleased to see the substantial increase in the size of our freshman class again this year,” said UIS Chancellor Susan Koch. “It affirms that an increasing number of prospective students and their families are choosing UIS for a student-centered undergrad experience - an experience that provides uniquely personalized educational opportunities that prepare our graduates for success in their careers and their communities.”

More than 90 percent (336) of the new freshmen are Illinois residents and 49 percent have self-reported as a minority. UIS saw an increase in the percentage of its student body (76.6 percent up from 75.5 percent last year) coming from Illinois. The university has a total of 3,276 students who are Illinois residents.

Earlier this week, U.S. News & World Report announced UIS was ranked the fourth best public university in the Midwest Regional category and the top public regional university in Illinois in the 2020 rankings. UIS was also ranked as one of the best ethnically diverse campuses in the Midwest category.