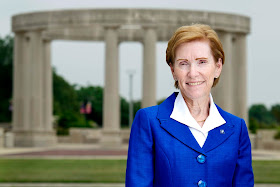 Koch has announced her retirement from UIS effective June 30. The appointment, which will be effective July 1, confers upon her these honorary titles, which reflect her longstanding service to the university and University of Illinois System.

Koch has been chancellor at UIS since July 2011 and has led the university through a period during which it expanded academic program offerings and increased both its fundraising and its partnerships with the city of Springfield as well as outlying areas.

“Susan’s leadership and vision helped broaden the horizons for the University of Illinois at Springfield and prepare it for a future of increasing impact on the community it serves,” U of I System President Tim Killeen said. “With this emerita appointment, we’re thrilled to both honor her legacy and cement her place in the university’s history.”

Koch expressed pride in the university and in its progress.

“It has been a privilege to serve as chancellor at UIS and vice president of the U of I System for the past nine years,” Koch said. “I’m proud of all we’ve done together at UIS to create an exceptional and personalized university experience for students and I look forward to following the continued growth and success of the entire U of I System.”

Since Koch became chancellor, UIS added programs designed to meet the needs of local and regional employers, including information systems security, data analytics, theater, exercise science, and a new bachelor of science degree in nursing through a partnership with University of Illinois at Chicago (UIC) and Memorial Health System.

Under her leadership, the university also achieved record fundraising that helped build the new $21.7 million Student Union, provided an increase in scholarship support, launched “The Sangamon Experience” exhibition space and research initiative, and laid the groundwork for the planned Center for Lincoln Studies.

Koch was instrumental in the university’s 2018 acquisition of Innovate Springfield, the downtown innovation and business center that became the first hub of the Illinois Innovation Network.

Trustees were scheduled to meet Thursday in Springfield but instead met and voted virtually.
Blake Wood at Thursday, May 21, 2020
Share