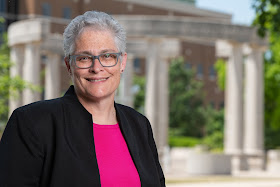 University of Illinois System President Tim Killeen announced today that he is recommending that University of Illinois Springfield Interim Chancellor Karen M. Whitney’s appointment be extended by one year.
Whitney, a nationally recognized higher education leader, has served as interim chancellor since June 2020 and will continue in that capacity through June 2022, Killeen said, pending approval of the University of Illinois Board of Trustees at its January meeting.
“I could not be more pleased to recommend that Interim Chancellor Whitney’s tenure be extended at UIS,” Killeen said. “She has guided the university with a deft hand through this challenging period of transition, creating stability while prioritizing efforts to provide high-quality education and doing so safely during a pandemic. I welcome the opportunity to continue to work with her.”
Whitney said she looks forward to continuing the work she began at UIS last summer.
“Working with the dedicated faculty, staff and students of UIS over these last five months, I am so proud to say that we completed our fall semester as planned and see our students succeeding,” Whitney said. “We are growing our academic programs, increasing our enrollment and ensuring that UIS continues to be united in safety and providing support for all students and employees.”
A national search for a permanent chancellor is expected to begin in late summer or early fall in 2021, Killeen said.
Whitney was appointed interim chancellor in June, just before the retirement of longtime Chancellor Susan Koch. Killeen recommended Whitney’s extension and he and Executive Vice President and Vice President for Academic Affairs Barbara J. Wilson consulted with faculty, staff and student leadership groups on campus that strongly support the move.
Since becoming interim chancellor, Whitney has used a 10-point plan to guide the university, which has more than 4,200 students and more than 1,100 faculty and staff.
That plan’s focus includes ensuring the safety of students, faculty and staff during the pandemic; continuing to provide excellence in education and research; working with university faculty, staff, students, alumni and community leaders to eliminate racism and promote social justice; and enhancing student recruitment efforts.
Prior to joining UIS, Whitney served as interim chancellor of the Pennsylvania State System of Higher Education in 2017-18 and was president of Clarion University in Pennsylvania for seven years. She remains president emerita of Clarion.
Blake Wood at Monday, December 07, 2020
Share