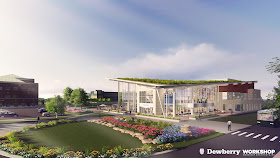 Trustees awarded a $12.7 million contract to William Brothers Construction Inc. of Peoria, which will be the general contractor for the project. Four other contracts totaling nearly $6.1 million for plumbing, electrical and ventilation work also have been awarded, but did not require board approval.

The planned two-story, 50,000-square-foot facility has long been a top priority for UIS, providing a hub for student life and fostering a greater sense of community on the growing, 5.400-student campus in the state capital.

Trustees gave project and design approval for the new student union in January 2014, a move that allowed Chancellor Susan Koch and UIS officials to ramp up efforts to raise $8 million in private donations to build the new facility.

More than $5.3 million in gifts have been raised and officials say they will meet their fundraising goal before the facility opens. The remaining $13.7 million will be paid through campus funds and a construction fee that students approved overwhelmingly in a 2012 referendum.

President Tim Killeen praised Koch and her team for forging a public-private partnership that cleared the way for construction despite budget challenges in state government that have shut off a traditional pipeline for funding.

“This project required a lot of creativity and good, old-fashioned hard work,” he said. “I am deeply grateful to Chancellor Koch, our students and our donors for coming together to give UIS a new centerpiece that will serve students and the community for generations to come.”

The new facility will fill a void that officials say has grown since UIS became part of the University of Illinois system in 1995. The campus was originally founded in 1969 as Sangamon State University, catering to upperclassmen and graduate-level students, but is now a traditional four-year school that lacks the central gathering place that student unions provide at most colleges across the nation.

Construction is scheduled to begin in May on the new facility that will anchor the campus’s south quad, providing campus dining services, a coffee shop, a ballroom with seating for up to 450 people and a Student Leadership Center that will house student government, volunteer offices and workspaces for student organizations.