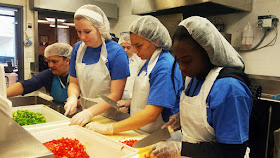 A group of students from the University of Illinois Springfield is spending their spring break helping to fight hunger and homelessness in New York City as part of Alternative Spring Break (ASB).

A total of 26 students and 2 staff members left Springfield on Saturday, March 12 and will return to campus on Saturday, March 19. The group is partnering with the Youth Services Opportunities Project and is volunteering at soup kitchens and related service agencies.

“ASB decided to go to New York City because we thought the opportunity to work in an urban population would offer a different experience for students,” said Brittani Provost, student president of UIS Alternative Spring Break. “I think working with the homeless populations will be very eye opening and help us learn how we can make a difference in the U.S. and in our own community.”

While in New York City, students are sleeping on cots in a gym at Jan Hus Presbyterian Church near Central Park.

“When a student travels on an Alternative Spring Break trip, they often learn more about where they came from than where they visited,” said Mark Dochterman, director of the UIS Volunteer & Civic Engagement Center. “The next time they visit downtown Springfield and run across a person that is struggling, I can almost guarantee that student will have different feelings, reactions, and actions to that situation than they would have just a week before the trip.”

The UIS Alternative Spring Break student organization was formed in 2009 when students took their first trip to Louisiana to help build homes for Habitat for Humanity following Hurricane Katrina. In following years, students have helped clean up damage from Hurricane Ike in Texas, cleaned up portions of the Mississippi river in Tennessee, helped rebuild homes damaged by hurricanes in New Orleans, helped with revitalization efforts in the Florida Everglades and worked with the homeless at soup kitchens in Washington, D.C. Last year, students helped with early childhood education and ecological sustainability projects in Biloxi, Mississippi.